We had a great Thanksgiving.  We hosted this year, which was only our 2nd time doing so and the first time we only had 6 or 7 people (can't remember if Paul's sister's boyfriend-at-the-time was there) besides the girls, who were only 9 months old.  This time it was 9 adults and the girls.

Yesterday I baked two pumpkin pies and made a sweet potato casserole (prepared it but didn't bake it) and last night Paul and I got the tables all set up.  We had to rotate our table 90 degrees, extend it and then put a card table at the end in order to accommodate everyone.  Then we brought the girls' table down from upstairs and set that up off to the side.

This morning we got up at 6:30 to make the stuffing and get the turkey ready and got that in the oven at 7:30.  My side of the family likes to eat pretty early, like 1:00, especially this year since they all had an hour and a half drive home.  After the turkey was in the oven I just showered and got ready. made a fruit salad, watched bits and pieces of the parade and then set the table and put out some snacks.  I wanted to get pictures of the table and all but I just didn't get a chance, or when I finally thought about it for real everyone was starting to gather around to say grace.  My brother snapped one and that's all I have.  The table wasn't anything special, anyway.  I didn't have much of a centerpiece and the linens were mismatched.  I don't have tons of Thanksgiving-specific stuff because I rarely host. 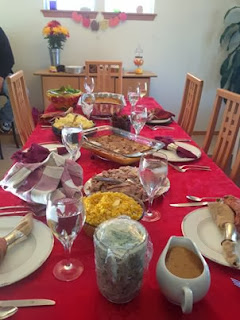 After dinner we all just sat around watching football and visiting.  Then we had dessert and everyone left shortly after.

The girls were a little bummed that there weren't any other kids to play with, but their cousin gave them a belated birthday present, so that saved the day for them. 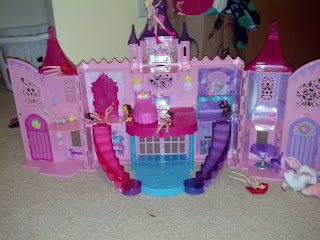 Barbie Princess and the Popstar Castle
Posted by Jill at 8:28 PM