We usually get snow a few times a year but hardly ever on Christmas.  And if it does snow on Christmas or Christmas Eve it doesn't stick.  This year it snowed Christmas Eve and stuck around through a few days after!  I couldn't believe it.  And not just at our house but at the in-laws, too. 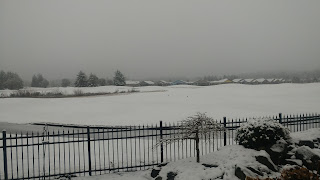 We went there Christmas Eve and spent the night, came home after a nice turkey dinner and then it was back to work for me on Tuesday, but only for three days and now I have another 4-day weekend!  Woo-hoo! 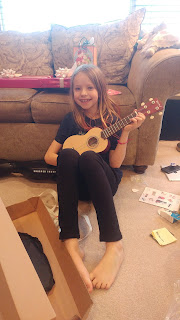 Olivia got a ukulele... 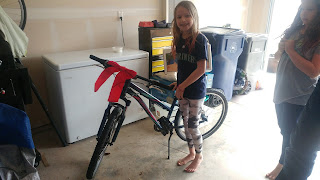 And a new bike 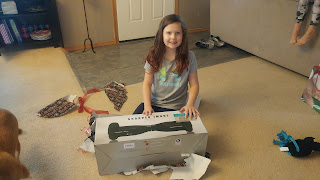 Kayley got a hoverboard and LOVES it, I might add. 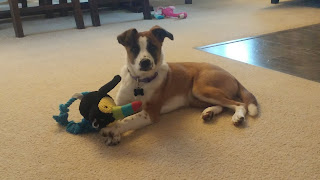 Kona got a toucan 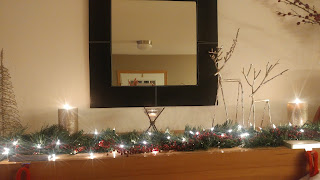 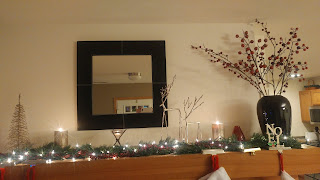 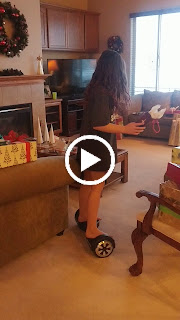 So I missed a few days of my 25 days of blogging.  Oh well, it was inevitable.

I had been looking forward to this weekend even more than I normally look forward to weekends (which is obvioulsy A LOT) because after a few pretty busy ones we have absolutely nothing going on and I have a new project I started last weekend and couldn’t wait to continue.  I am pretty good about purging my closet a few times a year and donating clothes I don’t wear anymore and what-not, but there are several household items in all parts of the house that I’ve been holding onto thinking that I will get around to using them or selling them but I never do, so my new project that I started last weekend and am going to continue over the next several weekends is going through every. Single. Room. In the entire house and getting rid of absolutely EVERYTHING that we don’t want or use.  Last weekend I did the master closet, Friday evening I did the linen closet and yesterday I did the master bathroom and my bedside table (and Paul did his and his portion of the master closet).  I still have a long ways to go but I'll do a little more today and just keep doing a little every weekend until I've gone through the entire house.

Friday night the girl's school had a Winter Bazaar. The girls and I went and did a little Christmas shopping.  Then one of their friends came home with us for a sleepover, but she ended up going home at midnight (she lives just a few houses away) because she couldn't fall asleep.  But she came back in the morning for breakfast and played some more.

Yesterday afternoon I took a break from my project to take Kona for a walk.  The weather lately has been gorgeous.  A little cold, but sunny.  We walked on some trails around our neighborhood and it was so nice. 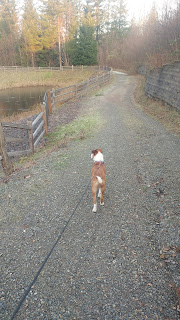 
After dinner we decided last minute to drive around and look at Christmas lights.  We do that every year, but this was pretty short because the girls were going to a friend's to watch a movie, so we will go out again next weekend and do it right

Today the girls get to go visit a friend who moved away in June but is in town visiting other friends.  That means that Paul and I can watch the Seahawks game in peace.  Except I'm still going to be working on my purging project and hopefully wrapping gifts.
Posted by Jill at 8:10 AM No comments:

On Monday the 4th and 5th grade choir had a field trip to the Seattle Center to perform for Winterfest.  Paul had the day off because he had to take his friend Joel to the airport and the timing worked out so that he could go watch Olivia.  I was really impressed with how they sounded at the first performance so I can only image how they sounded here. 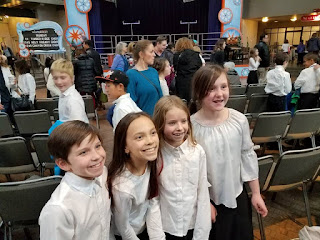 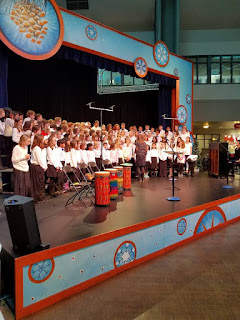 We live in the foothills of the Cascade Mountains, and we have lots of wildlife (bears, coyotes, bobcats, deer, etc.) that was here before all of our homes took over their habitat.  People are always posting animal sightings on FB, because it’s just cool to see a big ‘ol black bear ambling down the side of the road, and also to warn people that might be about to head out on an evening walk that there is a bear/coyote/bobcat in the area.

Lately there has been a huge increase in coyote sightings in particular.  Last Thursday a friend/neighbor texted a group of us to say that a coyote had been in her driveway while her son (6) was out playing (we both have homes that have the driveway/garage in the back with alley access).  She shooed it away, and a short time later it was back and all the way up to her patio this time (she has a pretty long driveway).  We were all like “Whoa” but then we got on with our evening.

Meanwhile, the next door neighbor girl was over playing with the girls.  Her dad and little sister were outside on their porch hanging Christmas lights.  An hour or so after the first neighbor’s text, another neighbor was texting us all about offering to drive everyone to choir practice the next morning.  Our next door neighbor whose daughter was over at the time and whose husband and 3-year-old daughter where outside hanging Christmas lights is part of the choir group and responded to the text with something like, “by the way, our daughter was just attacked by a coyote…She’s ok, but…”.  So anyway, it made the news, and since they are right next door you could see our house on TV.  Pretty cool, except for the reason it was there in the first place. :(

When they show the front of their house, ours in the one right to the left on the screen.
Posted by Jill at 9:47 PM No comments:

I had another post in mind for today but it's after 9:00 and I still need to finish making lunches before I can finally relax with a TV show or a book for a bit before going to bed, and I'm really tired because I've been awake since 5ish.  So here's a picture of Cleo sleeping on the fence instead, taken through the kitchen window. 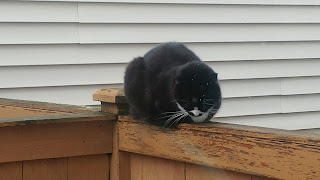 12 years ago today Paul proposed.  You can read about it here.  I can't believe it's been 12 years.  It really has just flown by.  And unfortunately, I never got the typical ring shot or any other photos.  I'm so bad about that stuff, plus back then we weren't in the habit of taking pictures with our phones.

Paul has a friend in from out of town.  He's a big Eagles fan (not sure why, he's lived in Washington or California all his life, I think) so he came up for the Eagles/Seahawks game tomorrow.  Tonight we all went to Snowflake Lane in Bellevue (a Christmas Parade with fake snow they do every year, every night between right after Thanksgiving and Christmas Eve).  It was a great way to kick off the holiday season.  Afterwards, we had dinner at the Cheesecake Factory.  Yum. 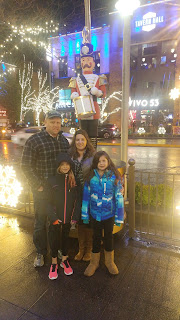 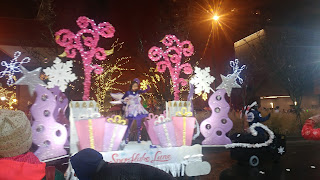 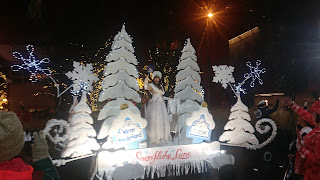 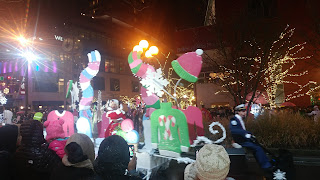 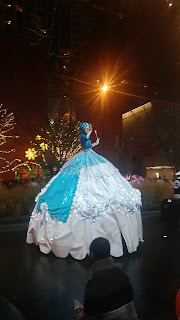 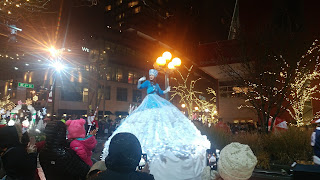 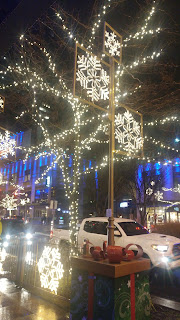 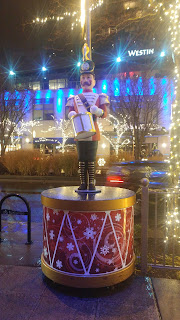 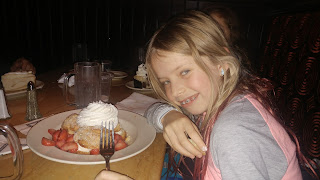 Olivia doesn't like cheesecake so she got strawberry shortcake instead.  It was huge, and true to form, she barely touched it. 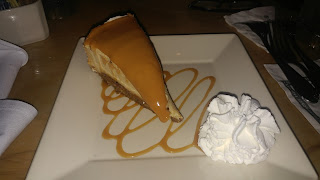 So, it's December 1st and I've decided once again to try and blog everyday between now and Christmas.  I've tried the last 2 years and failed miserably, and I probably will again but not a big deal, just fun to try.  I'm thinking of trying to make it all Christmas related, but we'll see.

I was just realizing the other day that I never posted about Halloween, or lots of other things since school started, but oh well.  I don't have a whole lot to say about any of it though, and not many pictures because the girls never let me take any.  Just to catch up, here's what's happened in the last few months: 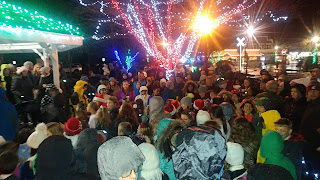 Olivia is in there somewhere
Last weekend we started decorating for Chirstmas.  The girls started going through all my leftover decorations that I wasn't going to use and decided to decorate their rooms with them.  It was really fun for them, and it looks really cute. 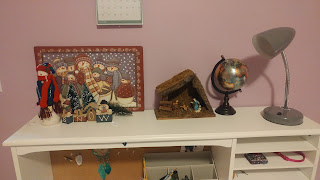 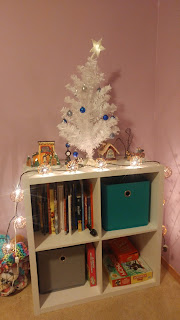 The girls each got a mini white tree from Target 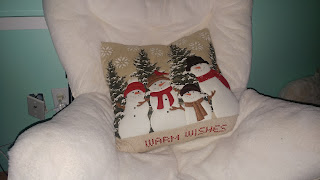 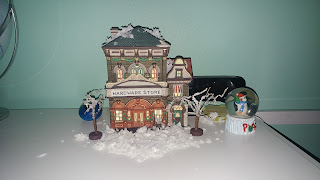 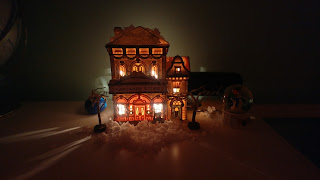 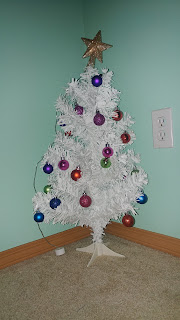