Last Thursday was my first day off from work since the girls started school.  When they were in Kindergarten and I enjoyed having 4 hours every day I couldn't wait until they were in first grade and I would have 7.5, even though I knew it would be short-lived because the plan all along has been for me to go back to work once they were in school full time.  But as you know, a job opportunity fell in my lap back in April (well, late February, but it was mid-April by the time I started) and I've been working part time ever since, but will probably start increasing my hours soon.  And due to the Labor Day holiday and leaving early one day for Meet the Teacher, I ended up working at least half days every day of their first week, so last Thursday was the first day I was able to enjoy having 7.5 hours to do whatever.  I had a huge long list of things I wanted to do but I mostly just ended up cleaning because I was so behind.  I had Friday off also and managed to run a few errands, but neither day did I really do anything "fun", like get coffee or do fun shopping (not just like grocery shopping or whatever).  Nonetheless, it was great having a few days to just catch up on some stuff.

It was also great to, for once, be home when the girls got home from school.  Usually I'm still at work and Paul is home to greet them.  Thursday and Friday I got to do it.  A friend came home with them on Thursday because her mom needed someone to watch her for a few hours, and when they got here I had a snack all ready for them and sat and talked about what they had done at school and it was so nice to be able to do that.

On Friday I picked them up at school because they really wanted me to (they love being picked up as opposed to riding the bus, even though all their friends are on the bus with them most days) and then we went to a park that recently got new playground equipment.  They ran into several friends there and had a great time.

Saturday was a fun family day.  We went to the farmer's market for the first time all summer and then out to Luther Burbank Park.  The girls played in the sand and the water and collected a bunch of tiny shells, then they played on the playground for awhile.  It was so nice to just have some family time because it seems they spend almost every waking moment that they're not at school with one friend or another.

Both the park on Friday and Luther Burbank Park yesterday reminded me of years past when it was just us every day and all the different parks we used to play at.  I've really been missing those days lately, because now with them in all day school they really are officially over.  I never cried when they started Kindergarten.  I was way too excited to have a few hours to myself every day!  And they were still home for lunch every day and we had all afternoon to go do things or just play together.  Then on the night before 1st grade after everyone else was in bed I was on Facebook and a friend had posted something about how her and her daughter had had lunch together almost every day for 6+ years and now they wouldn't be anymore, and I lost it.

So I've been feeling really nostalgic for the old times and I feel like the last few days were vaguely reminiscent of my old stay-at-home-mom days and it made me happy. 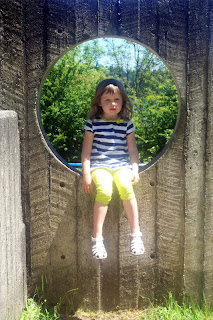 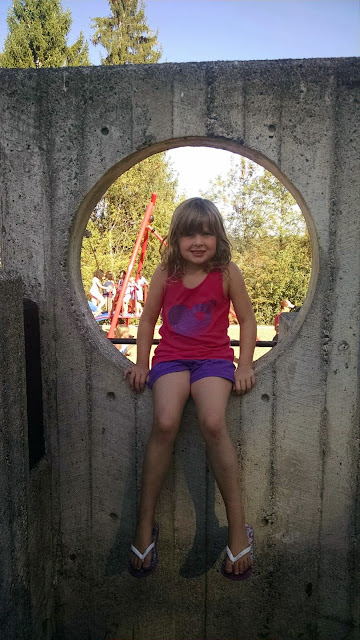 The playground at LB Park had changed some, but this concrete hole was still there.  On the left is Kayley in 2012, and on the right was Saturday.
Posted by Jill at 9:38 PM