Goings On and Updates

Time for a WW update!  As of last Monday which was approximately the 3 month mark I was down 7.2 pounds.  I had been down 9 the previous Friday at home, but I think I gained a little over the weekend, plus I’m always a little bit more at WW because I get weighed in the middle of the day fully clothed and having had food, water and coffee.  So, I had hoped to be down about 15 by now, but I still consider it a success because normally in any given 3-month period I would lose and regain the same 3 or 4 pounds about 4 or 5 times and still weigh the same or even more.  I'm really not even following the program as far as tracking all my points and all that, I just like the accountability and motivation I get from going to the meetings.  That has really helped me be more consistent and get back on track quicker after a slip up.

Speaking of slip ups, last week was not so good, so I'll probably be up a little at my meeting tomorrow, but hopefully I can turn things around and have a good week.

In other news,  the girls have started taking violin lessons.  It's a beginning strings class, so there is like 12 or 15 kids including one of their best friends.  They've only had one lesson so far but they are really enjoying it.  I played piano and trumpet growing up and really wanted them to play something so when they found out about this we were all over it.

Olivia is getting reading glasses.  They are super cute with a cheetah print, but we're waiting for them to be ready for us to pick up later this week.  She only needs them for reading so now we're worried about her losing them if she's going to be taking them off /putting them on all the time, so hopefully she'll just leave them on all day (assuming that's ok, I'll have to ask) and only take them off at home.  We'll see.

Today we made our annual trip to the pumpkin patch.  This was the first time in like 4 years that we went to the one close to our house as opposed to the one by the in-laws place or up in my hometown.  We used to really like it but it's way more expensive than the other two so from now on we'll probably keep going to the other ones.

We had the best weekend.  You know how I'm always complaining about my list of projects that I never have time for?  Well, we had planned to go to the pumpkin patch on Saturday, but it was pouring down rain so we went today instead and Saturday we stayed home all day, didn't have any friends over because I have a cold (although none even tried to come over) and we actually worked on some projects!  I put some pictures in a photo album, organized the linen closet, purged and organized my closet, put up a rack in our pantry for hanging brooms/mops/dustpans, and put up a white board calendar.  It was so nice to finally get some of that done.  I used to spend so much time on weekends just running errands, grocery shopping, cleaning and cooking but we finally hired a housekeeper to comes every other week and we've been doing a lot of grocery ordering from Amazon Fresh so I can finally do something else on weekends, and now with the changing weather and all I hope to have many more weekends like this one and tackle even more projects.

I think that's it for updates.  I never really finished my "week in the life" series, but it turns out all the weekdays were pretty much the same, with the addition of soccer on Mon/Wed, which just makes the whole evening more hectic.  Only 3 more games and we're done!  But then we'll probably start gymnastics again but that's only once a week (and probably not until after the new year). 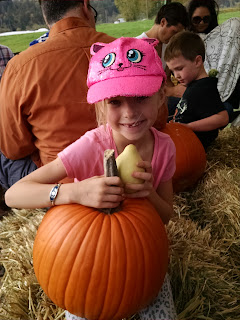 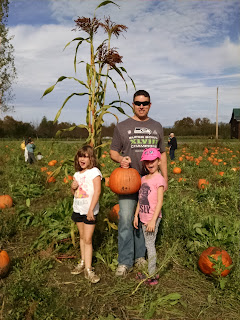 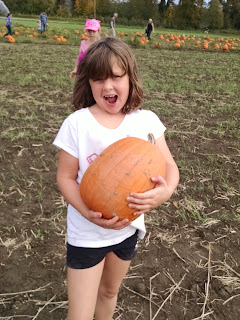 Right after this we took Kayley to get her bangs trimmed :) 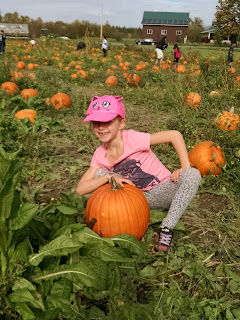 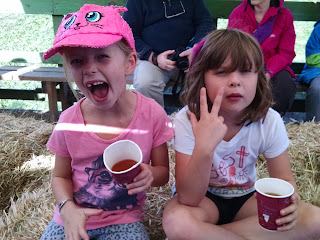 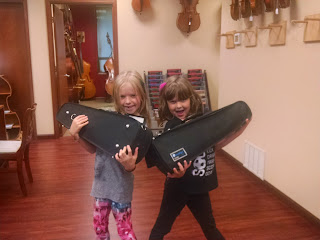 The only picture I have so far of the violins.  This was at the rental place when we first got them. 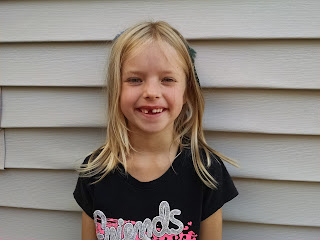 Did I mention Olivia lost a front tooth? 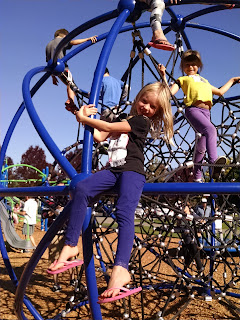 Playing at a new park 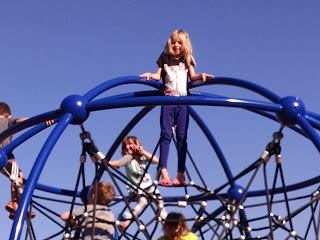 Hooray for a housekeeper! We have a wonderful lady who comes once a month and does the deep clean stuff. It truly keeps me sane!!!

And good luck with the glasses. Is she excited to get them? I am guessing we're not far off, based on what our eye doctor said last time, and I'm already nervous about how our girls will react.

Hope all is well with you and yours!