The girls have had early dismissal all week and last Friday for parent-teacher conferences.  So Friday we had our regular babysitter and I left work a little early for our appointments starting at 3:45, then Monday we had a brand new babysitter and then yesterday they went home with a friend.  Today I took the day off and was really looking forward to a few hours alone to do whatever (all the stuff that I'm always whining about never having time to do).

So after I dropped the girls off at school I started doing things around the house and realized I better hurry and find our Elf on the Shelf so he can make his traditional day-after-Thanksgiving appearance.  So I spent the first half of my alone time looking for him, to no avail.  Then I got a phone call from school; the girls have lice.  I wasn't surprised, because a friend texted last night that her daughter had it but I looked the girls over and didn't see anything, but I didn't look that hard because I got sidetracked with other things. 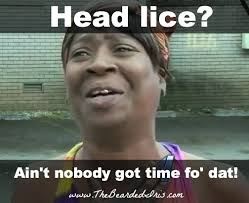 So, I had to go pick them up and then I called the lice specialist and got an appointment for Saturday.  Meanwhile, we are going to Paul's parents for Thanksgiving tomorrow and we were going to spend the night but now I'm not sure if we should.

So much for my day off.  I had a feeling it would get ruined, but I thought it would be that the girls would catch my cold.  At least I got a pie and a side dish made for tomorrow and got some other things done.

As for the Elf on the Shelf, a friend is letting me borrow hers in case we don't find ours in time.  Whew!