It's been a pretty good year so far.  A few weeks ago we bought a new car, a Toyota Highlander Hybrid, to replace our aging Highlander that needed all kinds of things done.  We love it.  It doesn't have all the bells and whistles I was hoping for, like a DVD player, but it has enough (back-up camera, lane departure, etc.), and the girls have iPads and what-not anyway. 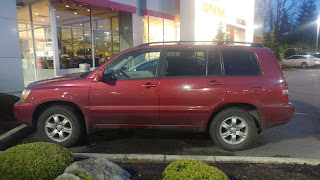 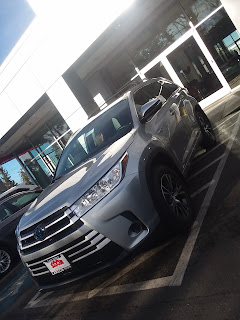 New car (I think one of the girls snapped this)


Kona got spayed, so that's out of the way. 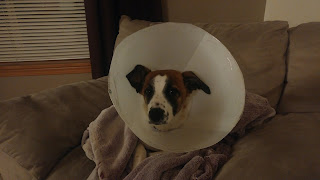 Olivia started dance classes.  Hip hop and dance troupe, which is the group that performs in the annual recital.  Everyone does the recital anyway (well not everyone, but most) but the dance troupe does a big performance at the end that's an actual dance theater number.  One year it was Cinderella, one year it was Alice in Wonderland and this year it is the Little Mermaid.   She has several friends that are doing it to so it should be a lot of fun.

Then last week Kayley had her tooth surgery.  You may recall about a year and a half ago the infamous bike accident of 2016.  She knocked out a permanent tooth.  They were able to put it back but it never really "took", so they ended up transplanting a lower tooth into that spot, and in about 6 months or so they will cap it.  Then she will have braces to close the gap where they pulled the lower tooth (would have had them anyway) and she'll be as good as new.

My birthday was the 24th so Paul and I had a date night the Saturday before and saw the movie Three Billboards Outside Ebbing, Missouri.  Really good!  Hoping to see the Shape of Water and the Post before the Oscars.