We took the girls to Disneyland 5 years ago this May when they were 6.  I'd been wanting to take them back for several years now and we finally went over the mid-winter break.

We flew down on a Saturday and the next day we went to Universal Studios, figuring Sunday would be the best day to drive up there with traffic and all.  They loved the new(ish) Harry Potter land (or whatever it's called) but everyone except Olivia agreed that the Mummy ride was the best! 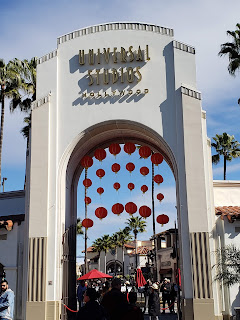 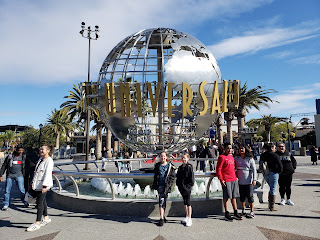 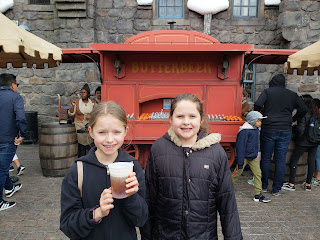 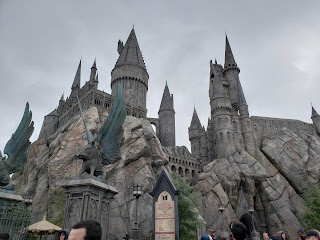 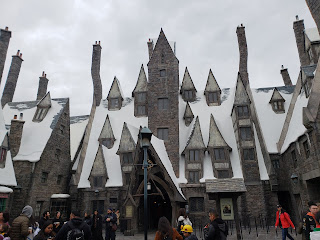 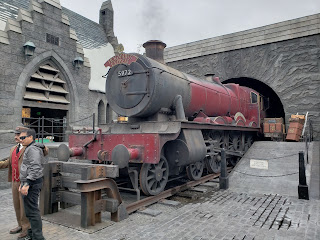 Monday we went to Knott's Berry Farm.  Paul had never been, nor the girls of course, and I hadn't been there since 1987.  I couldn't believe all the cool roller coasters they have now!  It is a coaster-lover's dream.  And we rode them ALL, most of 'em twice, except Montezooma's Revenge which was closed. 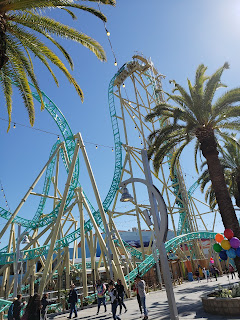 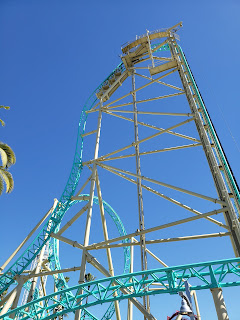 Tuesday we finally went to Disneyland. 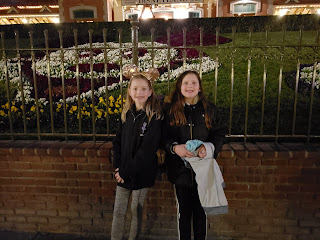 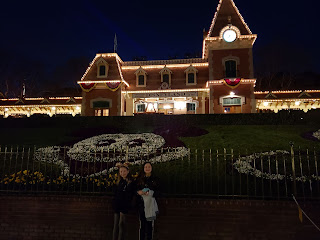 We ate lunch at Blue Bayou.  I love the atmosphere in that place.  So cool.

Wednesday we went to California Adventure.  We really enjoyed the Incredicoaster and thought it was a lot better than the former California Screamin'.  Also new and improved was Guardians of the Galaxy: Mission Breakout, formerly the Tower of Terror.  Probably my favorite ride there, although Radiator Springs Racers was right up there.  We missed that one 5 years ago because it broke down while we were there, so we were super excited to finally get to ride it this time.  It is so fun! 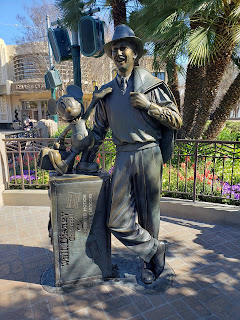 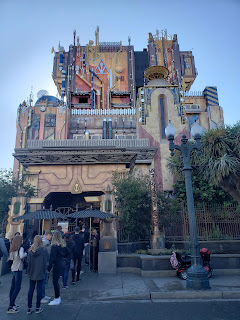 Guardians of the Galaxy: Mission Breakout 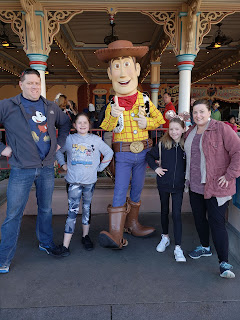 Thursday was not going to be very good weather so we decided to forgo the parks and head up to Hollywood to do the Walk of Fame.  But we were driving around looking at some other stuff first (Rodeo Drive, Beverly Hills Hotel, etc.) and Olivia started feeling carsick.  It was taking too long to get back to the Walk of Fame so we ended up just heading back to Anaheim, hoping that maybe Saturday morning we could try again. 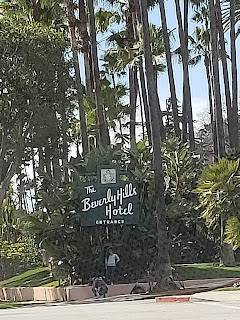 Friday we started out at California Adventure at 8:30 AM and then went back to Disneyland around 2:00 and stayed until almost midnight.  That was a really long day but so fun. 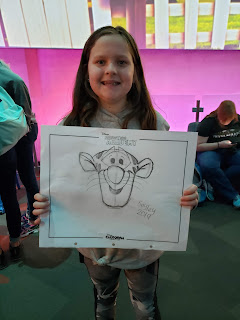 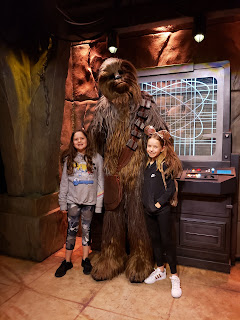 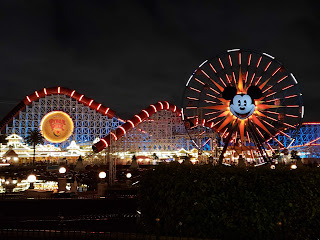 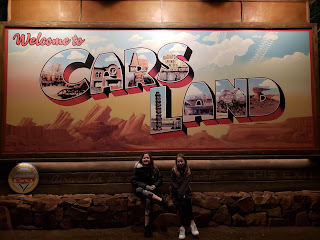 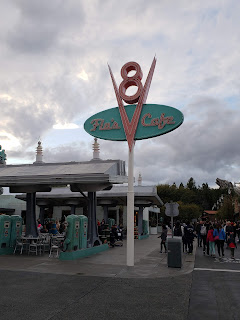 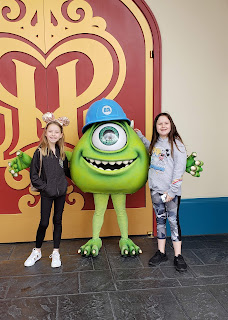 Then Saturday morning we decided to try once again to get to the Walk of Fame.  We drove straight there this time, no messing around with other stuff, but we (well, Paul) didn't want to pay $20 to park for just an hour or so so he ended up just dropping me and Kayley off while he and Olivia drove around.  So Kayley and I walked around and got pictures of the Pantages Theater and then started walking East toward the Chinese and Dolby Theaters and Johnny Depp's star (he's my favorite).  But we didn't realize just how far away we were!  But we finally made it and it was so cool to see all the prep going on for the Oscars which I had kind of forgotten was the NEXT DAY!  I had it in my head that it was still several days away.  Then we had to find Paul and Olivia so we could get heading back to the airport.  We were on the phone trying to explain to them where we were and it was taking forever.  Plus Hollywood Boulevard was obviously closed for a few blocks right around the Dolby Theater, making it that much more difficult to get to each other.  They finally were able to pull over on a side street a few blocks away and we found them and got on our way. 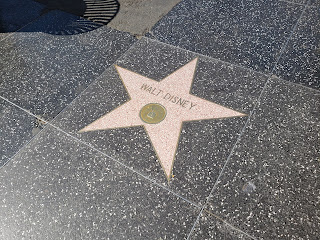 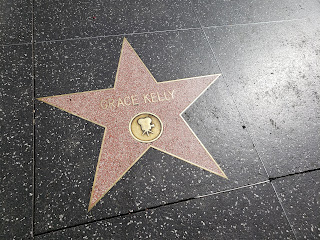 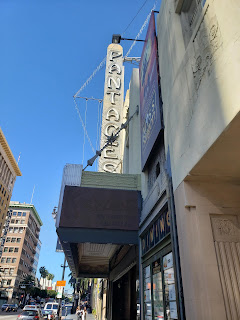 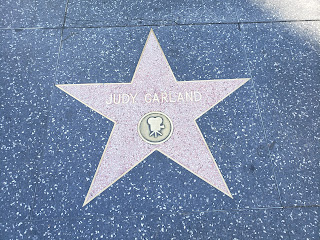 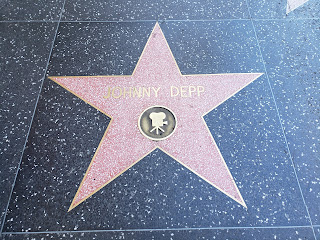 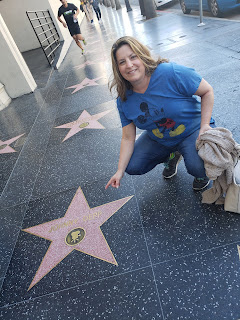 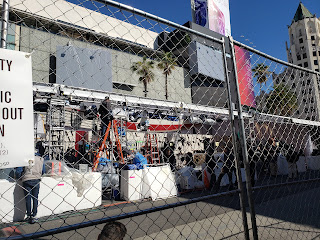 Oscar prep and the Dolby Theater 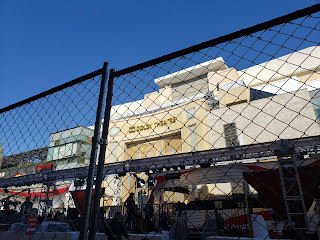 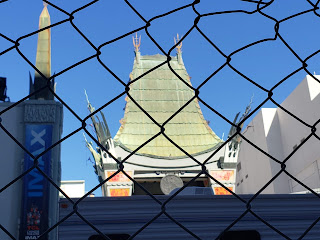 The top of the Chinese Theater