This is one of those rare mornings that despite not having to work (I took today and tomorrow off and go back to work on Thursday) I was ready to get up way earlier than normal and now I'm sitting at the computer with a cup of coffee and the house is really quiet because the girls are still asleep and Paul just left to go the gym and run errands.  It's been a long time since I've enjoyed a morning like this.

Anyway, it's been a pretty good December/Christmas season so far.  We had my work party last weekend on Friday, and then a friend's party the next night.  This last Saturday night we went out to dinner and then did our annual drive around the neighborhood to look at Christmas lights.  Last night we met friends in Bellevue for Snowflake Lane (they close down a section of street and do a parade with fake snow and music and everything every night between Thanksgiving and Christmas Eve).  I baked a bunch of cookies this year for the first time in several years, and I had my first and last Eggnog latte of the season (I love them but one is enough). 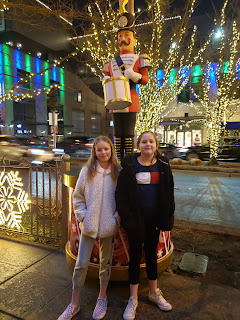 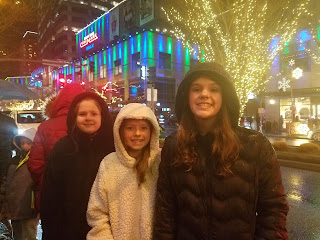 And a random picture of gorgeous Mount Si rising above the clouds taken from my car while stopped at a stop light. 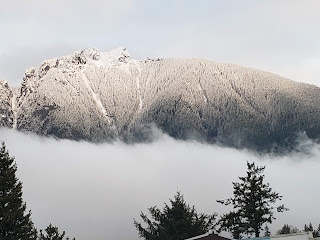