So I finally decided to start a "real" blog (I've been doing a teeny bit of blogging on the Nest/Bump), although I'm a little leary that I'll be able to find time to keep up with it. But the twins are starting to sleep in even later (I thought 7:00 am was pretty good but now it's more like 8:00! Whoo-hoo!) which means I can stay up later so I should be able to find blog time after they go to bed.

Anyway, they are almost 8 months old now! Unbelievable. I guess I have a lot of catching up to do as far as pictures, etc. but I'll take my time. This is such a fun age. They are really playing and interacting with us and each other and they laugh and giggle and squeal when we "chase" them or play horsie. Kayley is crawling and Olivia has two teeth.
Their first Halloween is coming up and I'm not dressing them up. I hope I don't regret that later. I just can't justify spending $20, probably even more, a piece, on costumes that they will wear for a few hours when they obviously have no clue at this age what's going on. And we're not taking them anywhere, we're just staying home and handing out candy. But we did take some pictures of them with some pumpkins so that can count for something: 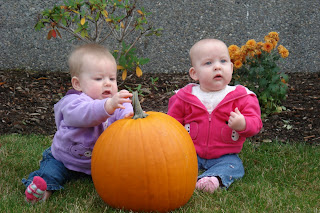