Olivia loves to play with clothes.  Whenever I'm folding laundry she's grabbing underwear and putting them on her head (never mind that when I was little (but way older than her--like 8ish) I used to put my underwear on my head and pretend it was a chef's hat and I would be the Swedish Chef from the Muppet Show) or grabbing some pants and trying to pull them on over the pants she's already wearing.  I totally need to get her a tutu and some cute dress-up clothes.  Yesterday she was upstairs playing while I was downstairs doing something with Kayley.  I had just done some laundry and there was a heap of unfolded clothes on the floor upstairs.  So while I was downstairs with Kayley, down she came wearing Paul's shirt but with her head sticking out one of the arm holes: 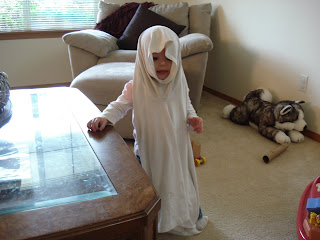