Potty training is going a little better.  There was a day last week where Kayley stayed dry most of the day, and Olivia has gone poop several times in the last week or so, as well as had long periods of dryness.  They do really well as long as I stay on top of it and take them to the potty every hour or so, but there are days that I just get busy with things and drop the ball, or if I am diligent about taking them I'm just a bit too late each time.  But, it's getting better.

Their 3rd birthday is rapidly approaching.  We're doing a princess theme, and I keep debating if I want to attempt to make this (from Parenting magazine): 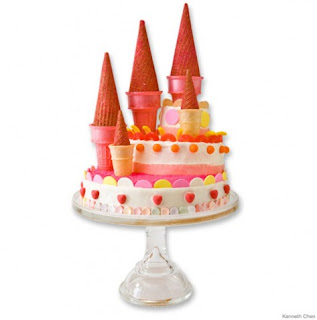 or just get a princess cake from Costco.  I'm leaning toward Costco, because the one above would probably cost me almost as much in ingredients, and I'd still have to supplement it with some cupcakes because I don't think it will be enough for 25 people.  It sure is cute, though!  We'll see.

The girls are really, even more so, starting to pick up on things/phrases we say.  For instance, I often get an ambigious response when I ask one of them a question such as, "do you want more juice?" or "do you want to go to the park?", so I'll say "is that a "yes" or a "no?".  Now, I often overhear Olivia asking Kayley, "is that a "yes" or a "no?"  It's pretty funny.  Then, yesterday in Target I was looking at something and Olivia was trying to get me to go back to the toy department for some toy puppy she had seen and she loudly blurted out, "let's go already!"  I about died laughing right there in the store.  Not that I ever say that or anything...

Kayley came down with a cold last night, so we didn't get to go to storytime today and we're supposed to get their 3-year pictures done this Saturday but might have to postpone that.  Also, we're supposed to go to a friend's Super Bowl party on Sunday and I'll be really bummed if we have to miss that.  But, so far they've gotten fewer colds this year than previous years so I'm thankful for that.
Posted by Jill at 11:03 AM