Paul's birthday was Monday so we spent the weekend at his folks' condo at Crescent Bar so we could go skiing at a nearby ski resort.  We left Friday evening, stopped for pizza on the way and then skied Saturday while his parents watched the girls.  I hadn't been skiing in about 4 years, and I'm pretty novice to begin with, but I actually did better than I thought, although I had to quit earlier than I would have liked because it was snowing pretty good and the groomed runs were no longer very groomed, making it a lot harder, for me anyway.  But it was still really fun.

On Sunday he went back up with his parents while I stayed with the girls, and we came home on Monday and they took us all out for his birthday dinner at our local Mexican restaurant.  It was a great weekend.

In other news, Kayley is almost fully daytime potty trained!  It's weird, because just a few weeks ago we were at a total loss, them having just turned 3 and not being anywhere close and adamantly refusing to go most of the time.  Then, all of a sudden, she just started going.  I had one really good day where I was on top of taking her every hour or so and she managed to keep her Pull-up dry most of the day, so the next day I put her in big girl underwear and she stayed dry most of that day, even going completely on her own a few times.  Since then, she's been wearing big girl underwear most of the time (excpet at night or if we go somewhere) and mostly staying dry.  She does have an accident every now and then, but she's doing great for the most part.  Olivia, on the other hand, will still hardly ever go.  We're hoping now that Kayley is mostly trained and wearing regular underwear, she'll be motivated to follow suit soon.

The weather has been crappy all week so we've been stuck inside, which has been a great way for me to get caught up on laundry and housework, but still a little boring.  Fortunately, Olivia loves to dance (and Kayley is usually a willing partner) so they've been able to burn off some energy. 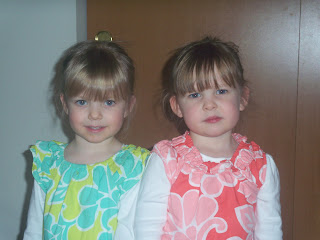 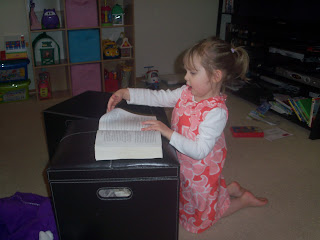 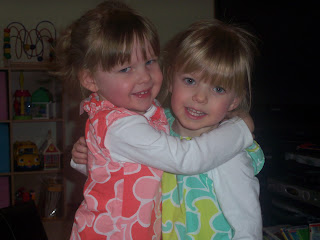 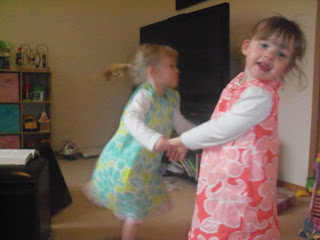 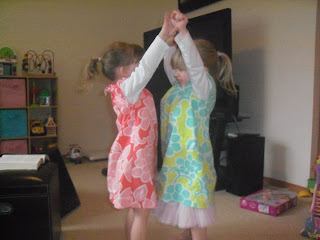