It has been an awesome 10 days.  I have had 8 out of the last 10 days off!  Christmas Eve through the 27th, then I worked on the 28th and 29th, and now I've been off since the 30th.  It has been so nice to finally have some time to do something besides work, clean, shop, cook, make lunches, etc.  (Speaking of making lunches, I just realized this morning that I will have to make lunches TONIGHT for the first time in over 2 weeks.  Blah.)  Last Tuesday, the 27th, Olivia and I spent the day together just the two of us because Kayley went to an overnight birthday party at Great Wolf Lodge (Olivia didn't want to go because I wasn't going to be there) and Paul went skiing with a friend.  We went to the library, then to Michael's, then out to lunch at Red Robin, then to the pet store.  Once we got home we painted some canvases.  It was awesome.  I bought a bunch of painting supplies back in June or July and they sat in a closet unused until last Tuesday.  Sigh.

Anyway, we had our annual New Year's Eve party at a friend's down the street.  We always watch the East coast feed of the ball dropping at 9:00 and then we used to come home shortly after (then I would be the only one to stay up until midnight watching the Space Needle fireworks), but this year we stayed until midnight.  Then on New Year's Day we woke up to a few inches of snow. 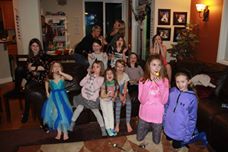 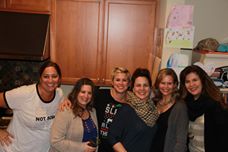 We got all of our Christmas decorations put away yesterday and I was able to work on some other projects throughout the weekend so it's been a productive few days.

I plan on taking the girls to see Sing today but we'll see.  We were going to go on Saturday but then a friend came over and that was the end of that.