Today was the last day of school!  REALLY early for us--we normally don't get out until like between the 17th and 20th, give or take.  But we had a really short Christmas break and no snow days this year, so I guess that's why.

I took the day off and Kona and I walked the girls most of the way to school.  When it was time to turn around, Kona did NOT want to go the opposite direction as them and kept pulling really hard trying to follow them, then at one point I dropped the leash and she was running loose but mostly just backing up because she was dragging the leash handle and it was scaring her...it was so embarrassing because there was a lot of school traffic and people around witnessing the whole thing, ugh. 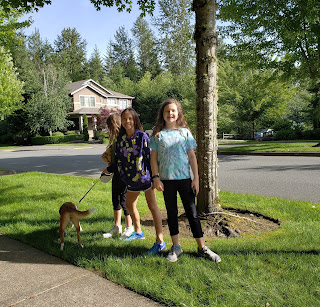 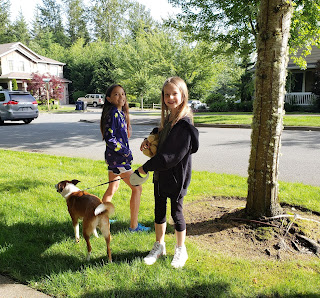 But once we finally made it home I had a nice quiet morning to myself to get some things done around the house.  But it was only for about 3 hours (which of course went lightning quick) because school got out at 11:55.  Kona and I walked to meet the girls, and then I took them to MOD pizza for lunch with their friend Sydney.  While we were there three of the four 4th grade teachers, which included both of theirs, showed up, so that was kind of funny/cool.  After lunch we went across the parking lot to Bartell's to pick up some stuff and get ice cream (our Bartell Drugs sells hard ice cream and growlers of beer!).  Then we went to the library because I needed to return a book and I figured why not have them get started on their summer reading, and they were game.  After getting books I dropped them off at Sydney's house where they were going to proceed to build a fort and then "read".  Yeah, right.

Anyway, while they were there I got to work planting more containers. 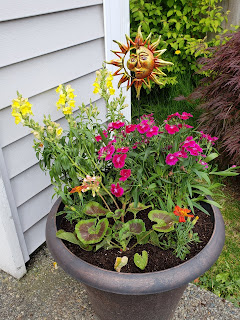 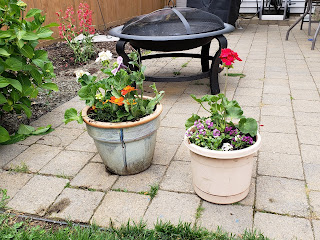 Now, I'm dreading going back to work tomorrow.  Whenever I have a random day off like today or when they are sick or something, it's always so nice to have that time to get caught up on stuff but it always makes me long for more.  Sigh.  Never enough time.

Oh, and when I picked up the girls from Sydney's I asked them if they really did read and, surprise, no they did not.  But they played outside so yay for that.
Posted by Jill at 7:29 PM