Random Weekend in the Nelson Household

I love doing posts where I document our “typical” day (mostly for my own future reference.  I love to go back years later and read about it), but usually it’s a normal weekday (with work/school).  This time I’m documenting a random weekend.  This particular weekend was sort of busy (for us, anyway) so later in the fall or early next year I will document a light one, ideally one where we have absolutely no plans.


Friday afternoon, 2:30ish:  Kayley has already left to go to Starbucks with a friend and Olivia leaves to go boating with a friend (Fridays are early dismissal days so they get home from school a little after 1:00).


Friday afternoon, 3:00:  My workday is over.  I shut down my laptop and the weekend officially starts.  I go outside, lie on a lawn chair and once the neighbor's loud edger/leaf blower whatever stops, I fall asleep.   I was tired from getting up much earlier than normal all week (school just started on Wednesday).  Meanwhile, Paul gets home from work.

After a quick nap, Paul and I went to the neighborhood gym and signed up for a  free trial.   His membership at 24 Hour Fitness just expired (it was one of those 2-year deals from Costco so it doesn't just go month to month) and now that I can work an earlier shift (because middle school starts earlier) I can finally join a gym again and actually have time to go.  So we're doing the free 7-day trial and then we'll probably sign up with our Regence insurance discount.

Once we got home from that he left to go pick up Papa Murphy's pizza and I poured a glass of wine and relaxed outside for awhile.

After dinner, some friends came over to drop off their dog because they were leaving the next morning for vacation and we are dog sitting. 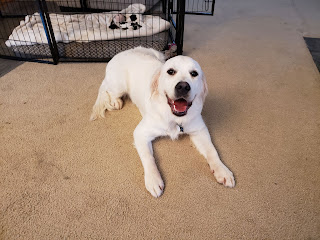 Saturday morning Olivia had her first soccer game of the season.  My favorite thing to do on Saturday mornings is sleep in, then relax on the couch with a cup of coffee, watch an episode of Flip or Flop or Fixer Upper and not have anywhere to be for hours if not at all.  I hate when I have to immediately start getting ready to go somewhere the second I get out of bed.  But this Saturday wasn't too bad.  I got up at 7:30 so I still had time to chill for awhile before having to go to Olivia's soccer game. 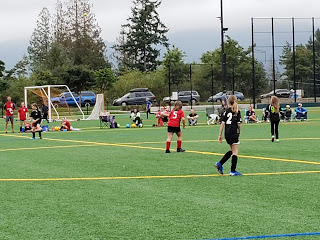 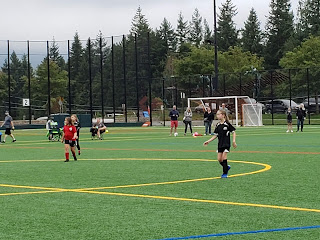 It's so hard to get decent pictures of her soccer games.  But anyway, after the game we stopped at the store for a last minute birthday present (she got invited to a birthday party that was THAT night, WTF?), then went home, had lunch and then I had a hair appointment.  As soon as I got home from the salon, Kayley and I had to head out to go meet our friends for dinner and a movie.  She and her friend really wanted to see It Chapter 2.  Normally I would have objected but I know they have both seen the first one so I figured it wasn't that big of a deal.  I figured the R rating was mostly for cheesy gore, but there was actually heavy usage of the "f" word.  Oops.  Oh well. 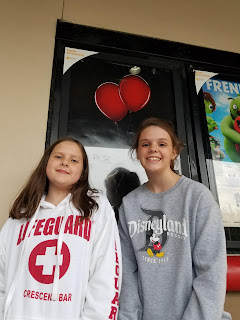 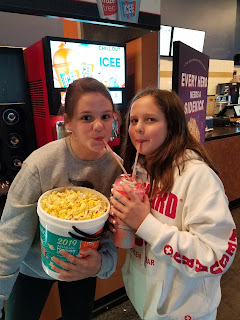 On Sunday morning I was able to do the coffee/HGTV thing for awhile, then I did some household chores, went grocery shopping and then semi-watched the Seahawks season opener (while putting groceries away, picking up, folding laundry, etc.).

We thought we would be going to a friend's birthday dinner tonight after the game but it got cancelled, so we will be eating at home and then just getting ready for the week.  I'm still working on Season 3 of Stranger Things so I'm planning on watching and episode of that and then read for awhile before bed.
Posted by Jill at 3:02 PM