Our 3 Days without Power

Our area was hit with a bunch of snow and freezing rain last week, causing lots of power outages.  Ours went out Thursday morning around 8 AM, and we didn't get it back until sometime between 5 and 10 last night (we weren't home when it came back on so don't know for sure).  While it was a major inconvenience to be without electricity, at least we had heat from our gas fireplace and we still had hot water.  Those two things were a major lifesaver!

To make matters worse, I couldn't go anywhere Thursday or Friday, because there was too much snow to get out of our driveway.  Paul managed to get to work by shoveling his way out, but I wasn't going to bother unless it was absolutely necessary.  The girls and I subsisted on cold cereal and cold sandwiches, mostly.  Friday morning I actually heated frozen waffles over a candle flame!  It kind of almost worked.

Friday evening I thought Paul would have to work most of the night (he works for the power company) but it turned out he didn't, so after digging out my car we managed to go out to dinner.  It was so nice to finally have a hot meal.

Saturday morning we woke up to still no power, so I made a Starbuck's run and picked up a few groceries.  Then we went to a friend's house to hang out for a bit and put some of our meat in her freezer.  Paul got called in to work and me and the girls and our friend went to dinner and then took the girls to the mall play area, which was crazy busy.

The girls and I got home a little before 10 and the power was back on.  Hallelujah! 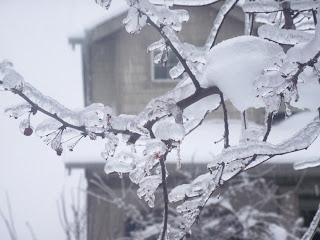 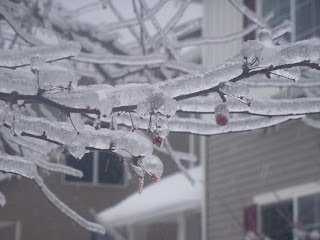 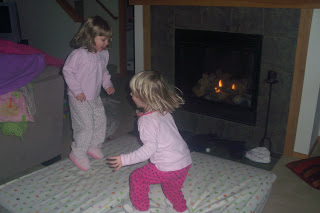 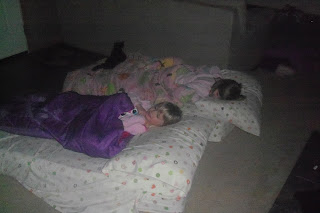 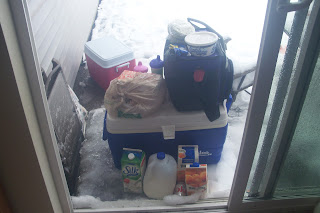 Our temporary fridge.  We buried all the meat from our freezer in the snow!
Posted by Jill at 8:16 AM

Wow! So glad you finally have power back! It sounds like you managed pretty well...but I can only imagine how hard it must have been to entertain two little ones - mostly by yourself, it sounds like - with no power!