First of all, our computer is down so I'm blogging from my phone today.  My mom suffered a stroke on January 2nd and spent two weeks at Harborview in Seattle.  Last Wednesday she was finally moved to a care facility in Mount Vernon, where most of the family live.  Now that she's further away we hadn't seen her since Tuesday so since Paul had yesterday off we went up to see her.
We got up there at noon so we took the girls to Red Robin for lunch, then visited mom.  My sister-in-law and niece were there, too, so we got to see them and also a family friend.
Since we were going to be up there we also arranged to go to the Children's Museum with my niece (the sister of the first one) and her two kids, the girls' 2nd cousins.  We don't get to see them that often so it's always fun to get together when we can.  My best friend and her son joined us also so it was great to see them, too.
After the museum we stopped for frozen yogurt.  This place was really cool.  You chose whichever flavor (or flavors) you want, fill your bowl as much as you want, chose whatever toppings (and there is everything under the sun) you want and weigh it at the end.  Kayley had cookies and creme with sour patch kids, marshmallows and nerds.  Paul did Olivia's so I'm not sure what she had but I think it was less "exotic" than Kayley's concoction.  Anyway, I haven't had frozen yogurt in forever so maybe these places are common, I don't know, but it was cool.
I wanted to get some pictures of all the kids at the museum but after two the phone died. 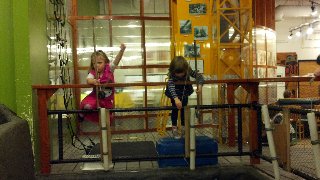 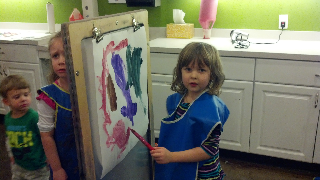