Summer Break: Week 9 and the Most Inefficient Way to School Shop

Well, not a whole lot to report this week.  Paul was off this week so he got to do some fun stuff with the girls. Monday they went shopping for all of their soccer gear, one day they were running around trying to find eclipse glasses and ended up visting his work since they were in the area, they went to lunch at Chick-fil-a for the first time (we've had it for a few years but it's not super close so they've never been.  It's close to my work so I was able to go once and frankly, I can take or leave it), they checked out the humane society for a dog but didn't find one, and Friday they went to Northwest Trek Wildlife Park.  They mainly wanted to try the zip line that we didn't do the last time we were there, but I guess they weren't too impressed with the one that they were able to do (there is a bigger one for people 18 and over).  They still had fun, though, and got to see lots of cool animals.

Then, over the weekend, I took the girls school shopping.  A few years ago I decided that it would be much easier to take the girl shopping for school clothes one at a time and still shop for supplies together, or preferably, just me without them.  But of course, they want to pick out everything.  So we did that the last few years and it worked out ok, but this year for some reason it was crazy.  Last weekend, Paul took Olivia somewhere, and while they were gone Kayley and I sat down and shopped for clothes online at Old Navy.  We found a bunch of stuff she liked, which was great because up until a few weeks ago she would shop nowhere but Justice.  Now all of a sudden she doesn't like Justice anymore but she also doesn't like Target, Children's Place, Macy's or Kohl's so I didn't know what I was going to do but she agreed to look at Old Navy and she actually liked a bunch of stuff.  We'll see when it gets here if she still likes it.

Anyway, so she was mostly done (yay!), and then yesterday Paul took her hiking with some friends and I took Olivia shopping for her clothes (Justice, Target and the Gap outlet.  Oh, and Claire's for earrings).  It would have been nice to buy supplies at the same time, but Kayley wasn't with us and I want to get everything all at once.  Then, today Kayley really wanted to go shopping with me.  I thought I was done with her, at least for now until the weather gets colder, but no, she still wanted to go shopping because I took Olivia yesterday.  So today I took her to all the same places I took Olivia yesterday, almost.  Target (more for stuff for her room), Gap (just a sweatshirt) and Claire's (and a few other places at the outlet mall but didn't find what she wanted).  And now tomorrow (I took the day off to take them to the neighbors eclipse viewing party), I will take them both shopping for supplies.  Grrrr.  That's ok, though, because it was so crazy at Target today, shopping for supplies there tomorrow will be much better. 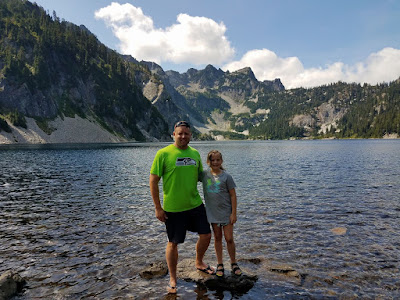