We've been wanting to get a dog for awhile now but wanted to wait until after the cruise.  Since then I've been looking off and on on Craigslist and Petfinder and haven't found much until Saturday.  I found the cutest dog and she was being offered for adoption through some rescue organization where I had to fill out an application and because we work and the dog would be alone for about 6.5 hours per day (I should have just lied) they turned us down.  I wrote back and explained that my job is moving in a few months and I will be able to come home as needed during the day to let the dog out and also we have a friend who could dog sit during the day until I move.  So lame.  I mean, how many people have dogs who work for a living?  TONS!

Anyway, while waiting to hear back from them (and figuring I never would, which I haven't) I got back on Craigslist on Sunday and found two groups of the most adorable puppies ever and they were in the same general vicinity.  I called the first one, which were our favorite, and left a message.  Then, I emailed the second person and she got back right away and we set up a meeting at 4:30.  It was about noon at the time and she lives a little over an hour away.  So we left around 1:15 because we were going to stop for lunch on the way.  Meanwhile, the first lady texted me and she was available to meet also, which worked out great since we were going to be in the area anyway.  So we ended up going there first since we had plenty of time before meeting the other lady at 4:30 if we skipped lunch and just grabbed a quick snack from Safeway.

Those puppies were super cute, but really skittish and shy.  Whenever we would (calmly) reach for one to pick it up it would pull back and shy away.  Neither Paul or I had a very good feeling about them.  We were worried they wouldn't be very energetic or playful.  It might have been that they just hadn't been very socialized yet (the owner lived alone on a big farm and they hadn't been around many people), but my gut just said no.  So we told her that we loved them (they were really cute) but we had another appointment at 4:30 so we would have to let her know.  Then we went to see the second batch and fell in love with Kona (we named her in the car on the way home).  She's some sort of Australian Cattle Dog mix.  The lady we got her from said she was blue heeler and Australian Cattle Dog, but those are two names for the same breed, so I wonder if she meant heeler and Australian Shepard.  Don't know.  We will eventually do a DNA test because I'm dying to know.  She is happy, energetic (but not overly hyper) and playful, SUPER cute and just what we wanted!  She slept all night on the floor in our room (the girls were in there too because we're having another heat wave and our room has a window a/c unit) and didn't make a sound. The girls just adore her.  We all do! 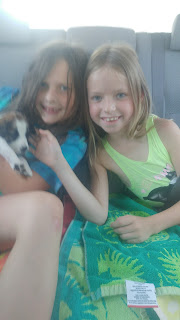 In the car right after picking her up 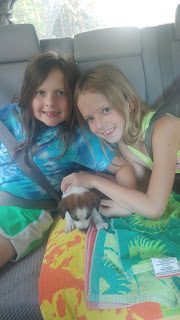 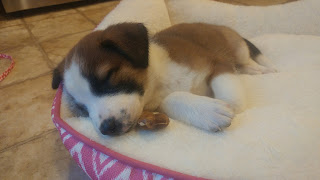 We are definitely finding out that puppy ownership is hard work, and not unlike having a newborn.  Up several times a night, constant stream of visitors, cleaning up pee and poop...

Lucky for us our friend who is a stay-at-home mom and has 3 dogs of her own offered to puppy sit for us during the week for as long as we need or until it becomes too much for her.  As soon as my job relocates it will no longer be an issue but I'm so thankful to have her help in the meantime.  And Kona helps keep her smallest dog entertained so it's a win-win. 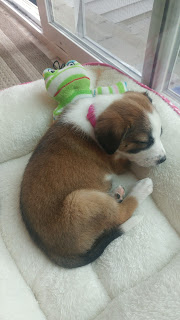 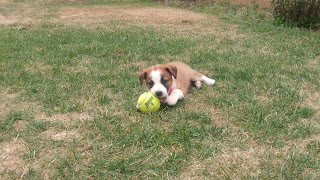 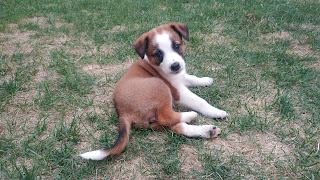 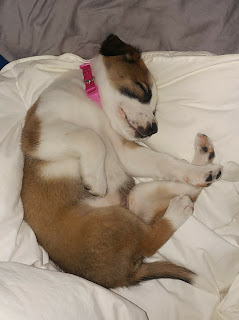 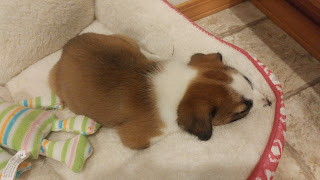 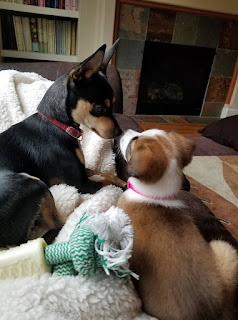 Jill - Congrats on the newest member of the fam. I had a question about an archived post and was hoping to chat quick. If you have a moment, can you reach me at virgilnci(@)gmail.com?

I appreciate your time in advance,