A friend of mine just had a birthday and turned 55.  She didn't do anything for her 50th so she decided she really wanted to do something fun for this birthday, like a quick little trip to somewhere warm and preferably beachy (having moved to Austin 7+ years ago she misses the beach/ocean).  She ultimately decided on San Diego.  And while she invited several people, I ended up being the only other person that could swing it, for whatever reason (money/time, etc.).

It was a really fun, whirlwind of a trip.  We both flew down on Friday (her from Austin, me from Seattle).  She got there around 10:30 AM and I got in around 3, so she took a nap and did some shopping while waiting for me to get there.  We actually stayed up in La Jolla because it was a little cheaper.  So once I got to the hotel and got settled in, we jumped in an Uber and went to the La Jolla town center area for dinner.  We tried to find a place with a good view of the sunset and almost succeeded, but the place we were at had a building next to it that was blocking the view a bit from the patio.  But we had a few appetizers and a drink, and then took a walk along the beach (but up on the sidewalk part, not way down on the sand).  After walking a bit we went to another place for a glass of wine and dessert and listened to some live music. 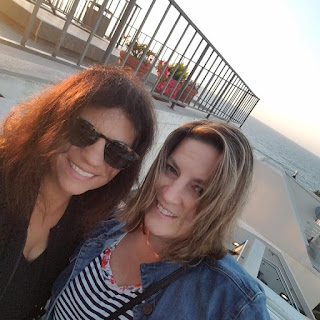 The next day we grabbed a quick breakfast from the coffee shop in the hotel and then took an Uber to Coronado and explored the famous hotel and sat/walked on the beach.  We spent several hours there because we decided once we were there that it would be a great place to watch the sunset.  So we hung out, had lunch, hung out some more, watched the sunset and then to another Uber to a pier to get on a boat for a dinner cruise.  We booked it that day from the Coronado Hotel so we didn't even have a chance to go back to our hotel to freshen up.  I hated going on that dinner cruise with messed up hair and worn off makeup, but oh well.  At least I had brought a cute sundress along so I had something decent to wear.  The cruise was really fun with amazing views of the skyline at night. 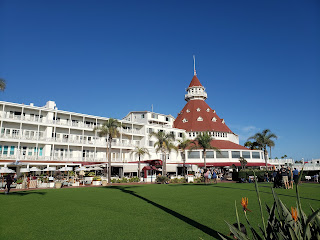 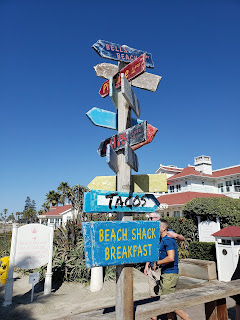 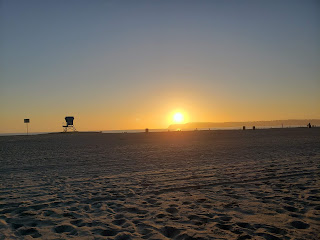 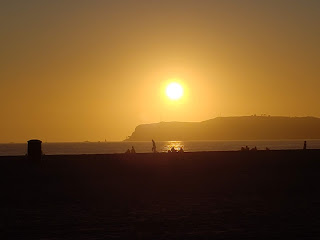 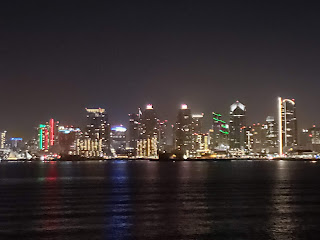 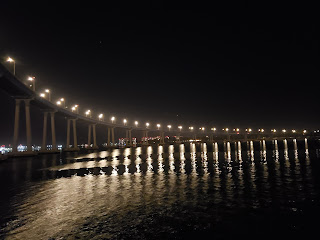 The bridge to Coronado 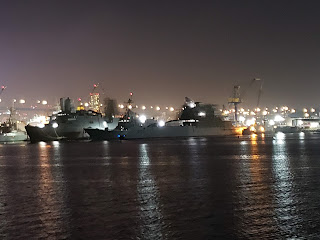 
Sunday morning we went to a great little breakfast place in La Jolla, and then walked around an outdoor mall until it was time to check out of the hotel.  It still wasn't time to head to the airport, however, so we stashed our bags at the hotel and took an Uber to Ocean Beach (OB to the locals).  It's a funky little area with cute shops, cool bars and restaurants and a really long pier. 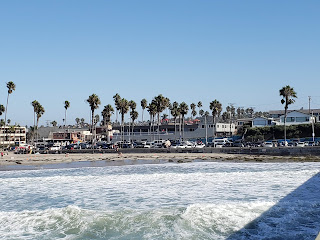 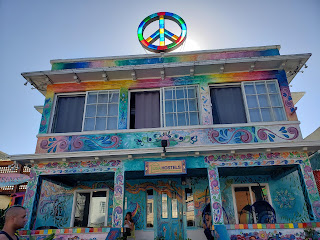 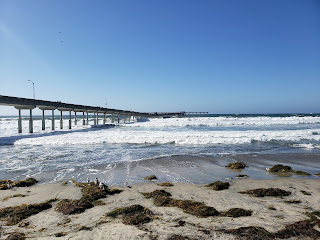 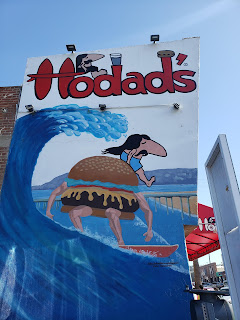 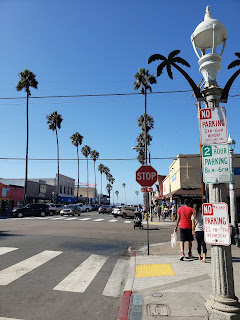 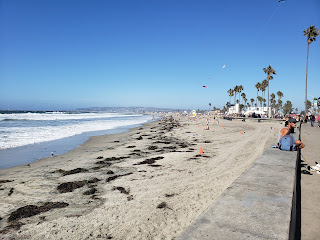 We walked around for a bit but then it was time for me to catch an Uber back to the hotel to collect my bag and then head to the airport.  She had a later flight so stuck around and enjoyed some fish and chips.  I'm hoping to someday make little trips like this an annual thing but right now too many other things/family travel plans competing for time.
Posted by Jill at 4:32 PM