My moms' group had a playdate today at Kidz Bounce (a place with a bunch of bouncy houses).  I was so excited because I've been wanting to take the girls there for a long time and I thought they would absolutely love it.  They came around, but it got off to a rough start.

First of all, it's Veteran's Day, a school holiday, and there were at least 2 birthday parties going on, so there were TONS of kids there, mostly older.  So the girls were pretty overwhelmed, and I was having a hard time keeping track of both of them.  At one point, Olivia was inside one of the bouncy houses and Kayley was stuck on a the stairway of a big slide, trying to get back down after chickening out.  So, while I was trying to rescue her, Olivia came out of the one she was in, and was wandering around looking for us, crying.  At that point I was ready to throw in the towel and go home (and we'd only been there maybe 15 or 20 minutes), but as I was putting their shoes back on they spotted another slide they wanted to try.  This time I went with them and they loved it.  After about 5 or 6 more times, I decided I was done and they were on their own!  They were fine without me and proceeded to climb up and slide down about a bazillion more times.  We spent the entire playdate on that thing, not interacting at all with any of the moms or kids from our group.  Oh well, at least they had a great time and we didn't have to leave early after all.  I definitely want to go back on a day that (hopefully) won't be quite so crazy crowded and chaotic. 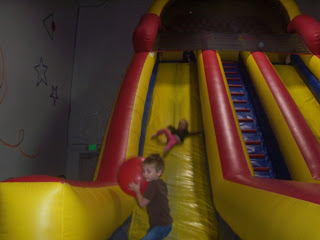 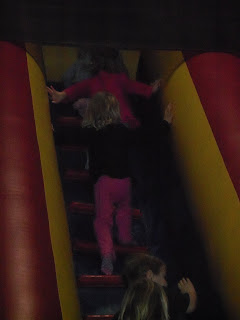 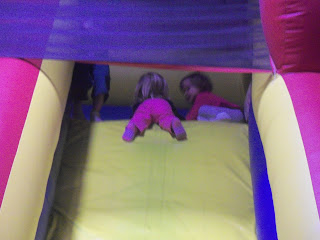 So glad it went better for you at the end. I'm looking forward to the girls being old enough to go somewhere like this too. We tried out the Little Gym on Friday. Horrible, Izzy was in tears and screaming, so I totally understand the overwhelmed thing. We were in a class for kids up to 2.5 years old and lets just say the girls were not ready for that just yet. No personal space was an issue. I'm sure your little ones will do better next time with less people around. :)