Show Us Your Life - Bathrooms

It's been awhile since I've participated in Kelly's Korner 's Home Tours.  This week is bathrooms. 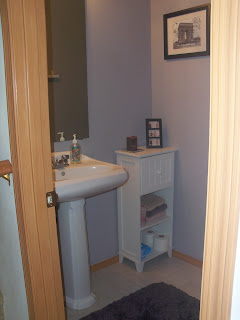 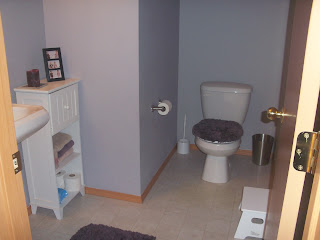 This is the only bathroom that we have painted so far.  It's hard to tell, but it's a silvery lavender color.  I fell in love with the color, and thought that it would go great with our purple rugs but turns out it's a bit too blue.  Oh well.  It will have to do for now.
Here's the girls' bathroom: 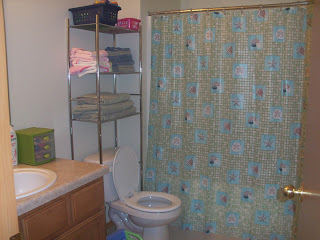 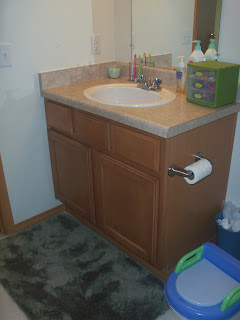 The only reason I have that shower curtain in there is because I needed something blue/green to go with towels we already had, and that was the cheapest one I could find, plus we already had (Paul's before we were married) a framed picutre with seashells, etc.  I thought about re-doing it in some kid-friendly theme, but have pretty much decided against it, simply because I don't want to have to re-do it again in a few years when they outgrow it.

And now to the master: 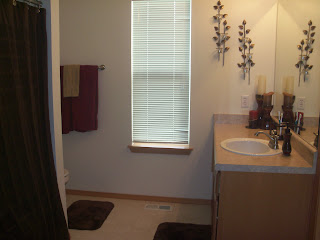 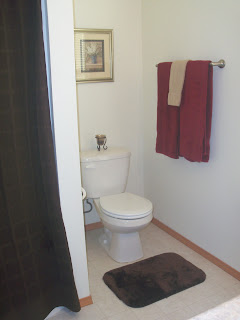 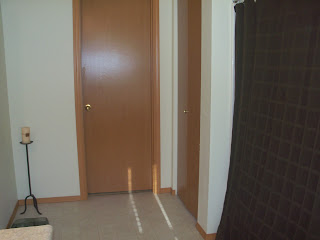 Blank wall where another sink/vanity could go, door to closet, and linen closet
When we were looking at the model and deciding on all our options/upgrades, etc., we decided not to get dual sinks/vanities because we thought that wall space would be the only place to put a towel rack.  It never occured to us that we could put it by the toilet, which is where the builder put it, leaving a huge blank wall on the other side of the door.  I hate that we didn't see/think about that, but at least we saved some money, I guess.
Posted by Jill at 3:08 PM

You have lovely bathrooms! I love the silvery lavender color. We have something similar in our second floor bathroom and it's one of the only rooms we haven't painted since moving in!