I love Gymboree clothes for the girls, but darn, they're expensive.  We have an outlet nearby, but even they are way pricey.  I went through a phase sometime last year where I was obsessed, buying quite a bit of stuff there, marked down of course, and then using Gymboree Bucks to buy even more but I finally decided I had to quit.  But a few months ago I wandered in there anyway, just to look and I fell in love with the cutest collection in a horses/cowgirl theme.  As a horse-lover I was all over it.  I drooled for a bit but left empty-handed, knowing it would eventually get marked down (but would the right pieces still be there in the correct size?).  Several weeks later I went back and it was still there, marked down.  But I still decided against getting it.  Then, yesterday while the Seahawks were getting their a$$#s handed to them by the Falcons, I decided to go to the outlet mall for some other things and of course popped back in there, and guess what?  It was marked down even more!  I still almost didn't buy anything, but then I decided it could be one of their Christmas presents, so I did. 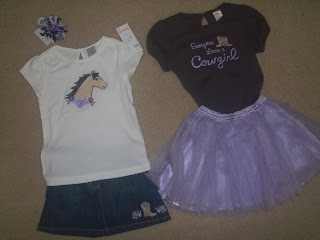 Shirt says, "Everybody loves a cowgirl"

I'm thinking maybe a cowgirl theme for their next birthday party--we'll see.
Posted by Jill at 2:53 PM

I love how you kept checking :)

And I'm definitely doing a cowboy/ cowgirl theme for their 4th birthday I think (look at me, all pre-planning for 2 years' time :)) - I already have two or three parties pinned!!!