Finding Out it was Twins

As I've mentioned in several previous posts, I was not yet blogging 5 years ago when I became pregnant with the girls.  I decided that in honor of the 5th anniversary of my pregnancy/their birth, I would document the highlights as their anniversary occurs.

July 26th was the anniversary of my first ultrasound.  I was 7 weeks 1 day.  It was at the RE's office.  It was also the day we found out I was carrying twins.

I suspected twins all along due to my high beta numbers but I was really hoping for a singleton.  When they told us it was twins I was really disappointed.  Now, don't get me wrong--I was THRILLED to be pregnant, and I would have taken twins or even octuplets over zero babies ANY day.  But I was sad that I would miss out on:
I'm sure at the time I had a longer list, but those were the main concerns.  Nonetheless, I was still thrilled to be pregnant and loved both girls to death from the get-go.  We never did a yoga class, but I did take them to Gymboree when they were around 14 months, and when they did circle time I just had to switch off from one to the other and the instructor ended up doing things with whichever one I didn't have at the time.  It was hard, and I was so jealous of all the "normal" mothers with just one baby.  We mangaged to do lots of other fun things over the years--storytime, mall play area, indoor playground, childrens' museum, etc, so who cares about a stupid yoga class. 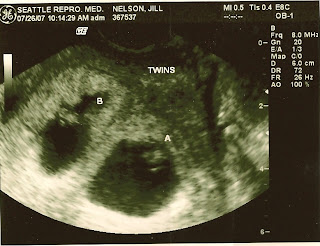 I guess I tried not to think about those things with the first set. But, my one thing that I did miss out on is having a great breastfeeding experience. One of my girls never did latch properly so she pretty much just got bottles of pumped milk. I just hope I am more successful with my next set! Only time will tell :)

ohh, i felt the same way about the twins. my girls were my firsts, too, and i felt like i missed out on a lot of things having two babies.

actually, i barely left the house during the first 5 or 6 months they were here...it was so overwhelming! i took them to the mall once by myself and ended up with all three of us crying in the parking lot! ha!