The girls start preschool in less than a month.  I took them to Walmart on Tuesday for backpacks.  Kayley is so proud of hers and wears it around everywhere.  It's bigger than she is, but she wouldn't go for the smaller ones because, heaven forbid, they didn't have any characters on them.  They both had to have the Disney Princesses.
Then Wednesday we went to the outlet mall for some school clothes.  I thought it would be fun to have our very first mother-daughters school clothes shopping experience, plus I wanted them to be able to pick out stuff that they'll actually wear, but it turns out they have the attention span of a gnat, so we didn't last long.  At least at the Gymboree outlet they have a video playing.  I guess I'll keep doing the clothes shopping by myself for awhile.
They did enjoy a ride on the carousel, however. 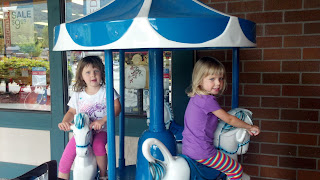 In other news, we are experiencing another major bedtime battle.  For the longest time now, then routine has been that I leave the small lamp on when they go to bed because Kayley or sometimes both of them like to read or play quietly for awhile before going to sleep.  After they are both asleep, I go in and turn it off.  Now, all of a sudden, Kayley has decided she can't sleep with the light on and turns it off, but Olivia is scared of the dark.  So they argue and fight over the light and Kayley will keep coming out of their room to complain that she can't sleep with the light on.  I try to explain that Olivia will fall asleep soon at which time I'll turn the light off, but she keeps whining about it.  I've also tried to calm Olivia's fears by showing her the light from their nightlight (which is kind of around the corner from her bed in an alcove, so maybe I should move it) and also offering to leave the door open a bit, but neither is good enough.  Sigh.  Once again I'm left contemplating whether it's time for them to have separate rooms, but I really don't want to give up our office/guest room.
Posted by Jill at 8:01 AM

I will take our girls clothes shopping if I am just looking for one thing...but for anything that takes any type of "browsing", I do it by myself. While I'm looking forward to the idea of mother/daughter shopping, I'm relishing the idea of surprising the girls with what I bought now. ;) [That's my story and I'm sticking to it!]