It's 4 months away, but I've been thinking about what to do for the girls' 5th birthday pretty much ever since their last birthday.  So far, all we've ever done for their birthdays is have the family over.  That's usually around 25 people including us which is about all our house can handle.  For the first few birthdays, they were obviously too young to really know what was going on and to care whether they had any friends over, so it worked out great.  When they turned 3 and 4, though, we wanted to invite some friends but still had the space issue and didn't want to spend a fortune renting a place that would accomodate both the family and some of their friends (and their parents and siblings), so we compromised by just inviting their closest friend and her parents, who are good friends of ours, and last year we extended that to include another couple that are good friends of ours but don't have children.  We've considered the option of having two separate parties--one for just the family and another one for just their friends (and their parents/siblings) but have so far chosen not to do that.  But now that they are older and have made several friends in the neighborhood, church and preschool, we'd really love to finally have a "friend" party, whether or not we still have a "family" party.

I'd love to have their party at Kidz Bounce or someplace big enough for everybody, but it's just not in the budget.  I'd really love to have just a friend party at Chuck E. Cheese (and so would they!) and if we could keep the guest list down to about 6 (so 8 kids total including the girls) it would probably cost about the same or even less than what we've spent on food and decorations in the past for a home party with just family, but that would force us to leave out some friends who've invited us to their birthdays and whom we'd just really like to invite anyway becuase they are good friend that they play with often.  Ideally, if we were to do Chuck E. Cheese, there are at least 9 or 10 kids that I would really want (and feel somewhat obligated) to invite.  Enough to push up the cost above our budget, maybe.

So I've been leaning toward just having a party at home, with just their friends and their parents and siblings.  We will see all of my family a week later for their cousin's birthday, and 3 weeks after that for their other cousin's birthday, anyway.  Then, the other day it occurred to me that maybe we could still do Chuck E. Cheese with just us and maybe one friend and their parents/siblings on their actual birthday (whereas their party would be the weekend before).  That way, they would get their wish of a Chuck E. Cheese birthday, but also have a celebration including all of their friends.  The best of both worlds.  Then again, doing both would probably cost almost the same as just having the party we really want in the first place.  So we'll see, but even if we decided we can't do Chuck E. Cheese at all this time, we probably can in the next year or two (next year we won't have preschool (X 2) to pay for anymore and the year after that I'll be returning to work, lord willing). 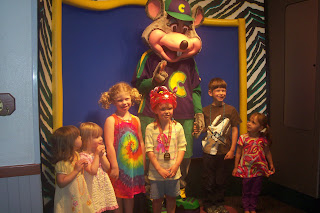 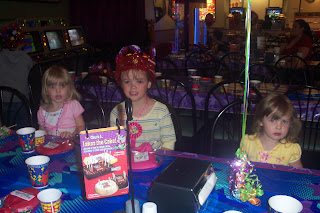