Five years ago today was my baby shower (actually, I had two, but this was the "main" one).  I didn't have a blog yet, so I'm blogging about it now in honor of the 5th anniversary.

I think I was about 23 weeks or so (we needed to have it early in case I ended up on bed rest or something).  Our current house was being built and we had just sold our condo, so we were temporarily staying with Paul's best friend while we waited for our house to be finished.  His neighborhood has a clubhouse that residents can use for events, so that is where we had my shower.  My oldest and dearest friend (we've known each other since kindergarten) hosted it and did a great job with the decorations and food but unfortunately I don't have many pictures. 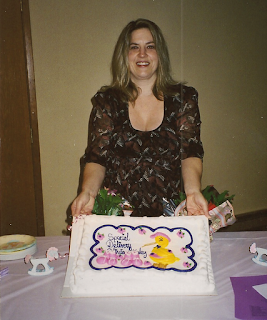 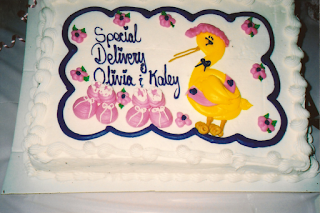 Kayley's name is spelled differently on the cake because at the time we were going to spell it "KALEY", but changed our minds later because we were worried people would think it was pronounced "Cal-y", so we added the second "y".

Last year on this day we had a birthday party for Gaga, but I think we actually got him at my second shower.  Can't remember for sure. 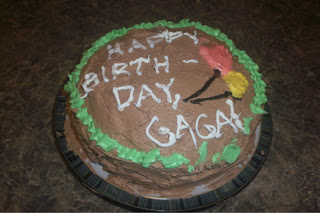