Kayley and Mom's Day of Fun

With the girls being in separate classes in school this past year, they have made some of their own friends in addition to their several mutual friends, and sometime one or the other will be invited to a birthday party that the other one is not invited to.  Such was the case today.  Olivia went to a birthday party solo and I took the opportunity to spend some rare one-on-one time with Kayley.  She had some gift cards to Claire's and Target, so our first stop was Claire's.  She got a new Beanie Boo and some candy (what else) and while we were there I picked up a few things for some upcoming birthday parties.

Then we went to Mod Pizza for lunch, where amazingly enough I got Kayley to actually smile for a picture: 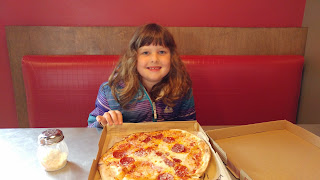 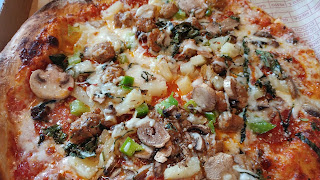 After lunch we went across the street to Pinkabella Cupcakes for a treat (to bring home, as we were pretty full after that yummy pizza) and then to Target, which was especially crazy being the Saturday before Father's Day, but we survived.  So we didn't do anything particularly exciting but it was still nice to have some one-on-one time.
Posted by Jill at 4:24 PM