Several months ago I discovered that a new brewery had opened just down the street and I never knew about it.  I'm not much of a beer drinker--I much prefer wine or cocktails--but I do enjoy sampling new micro beers now and then and had been dying to try it out so we tried to go on St. Patrick's Day while the girls were at a sleepover, but of course, the place was wall-to-wall packed so we went elsewhere instead.  Since then I also found out that the place is kid-friendly, so tonight we took the girls and finally went.  It's a really cool place.  Very industrial looking, with long wooden tables and a few couches for seating, as well as some normal tables and the bar.  They also have an outdoor area with a section for kids with giant Jenga and some corn hole games.  Very fun.  But they don't serve their own food.  Instead, they have rotating food trucks every night.  One of the most popular is Nacho Mama's, which was the one there tonight.  The girls love nachos and don't get them that often, so I figured it would be a good night to go.  They had just plain but Paul and I got Caribbean Jerk Chicken.  So yummy! 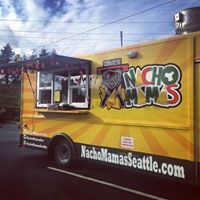 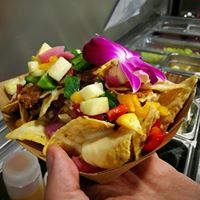 I think this photo is the Hawaiian Pork, but our looked similar. 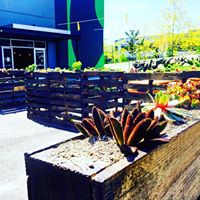 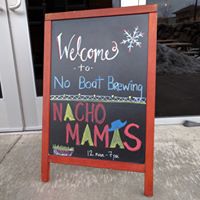