Random Thoughts on the Eve of the Last Day of School

Paul and I were talking last night about how Father's Day will finally be the end of all the holidays/birthdays/anniversaries for awhile.  It starts with mine in late January, then Valentine's Day, the girls' birthday, Paul's birthday, Easter, Mother's Day, our Anniversary and finally, Father's Day.  We're glad this is it for awhile, except for the 4th of July in few weeks.  Then we don't really have anything until Halloween.  But the first half of the year is crazy.  It's no wonder I can never lose any weight.  Next year, I'll know that from the get-go and will try to come up with a strategy (and I'll be working on it in the meantime, of course).

So, tomorrow is the last day of school.  The girls' last day of 3rd grade!  I was going to take that day and the next off, but our new summer nanny is only available through the first week of August and wants to work as much as possible between now and then, so I decided to save my PTO until late August when we will be without a sitter anyway (Paul has the 2nd and 3rd weeks of August off).  So I will work tomorrow as normal, and the girls will get out of school at 11:25.  The sitter will meet them at the house and be here until 1 when she will then take them to our friend's down the street to their annual Last Day of School party.

Then, even though she originally said she wanted to work as much as possible until she goes back to school, some trip or something came up and she asked for Thursday the 22nd and Friday the 23rd off, so I'm taking Thursday off and Paul is taking Friday.  I really wanted to take a day or two at the beginning of summer break anyway, so I'm kind of glad it worked out that way after all.  I don't know what we're doing yet but hopefully something fun outside.

Lastly, I snapped the cutest picture of a sleeping Maisy today. 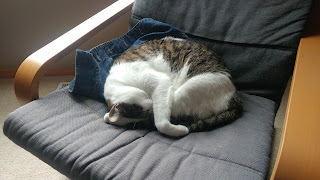