What just happened?!!?  We just started a new year and I was making resolutions and goals and plans for the year and now all of a sudden school ended and the year is half over.  And our first week of summer break is almost in the books.

Monday was the girls' last day of 3rd grade.  I think I mentioned before, but I had planned to take that day and the next off, but because our new babysitter won't be available later in the summer and wanted to work as much as possible until then, I switched my days off until late August.  Except for today but I'll get to that in a minute.

So they went to school for just under 3 hours, then the babysitter met them here at home.  She was with them until 1:00 and then they went to a friend's annual Last Day of School party.  Paul picked Kayley up from there after work to take her to the dentist while Olivia stayed there for awhile longer.

Here's our official "last day of school" photos--no chalkboard or cute outfits, just me turning around in the car at a stop light and then snapping a quick one from the drop off lane because Kayley refused to let me take one of her. 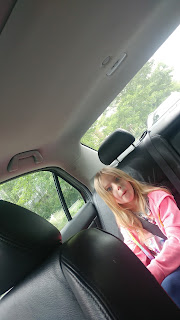 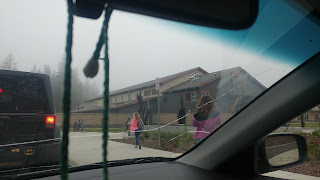 Excuse the cracked windshield--I had just replaced it when I got another rock chip like less than a month later that spread right away before I could do anything.

Here's the pile of stuff they came home with.  This picture doesn't do it justice (plus some had already been recycled).  It will take me all summer to sort through it all (not that I'm going to keep any of it, or not much anyway, but I just want to look at it all). 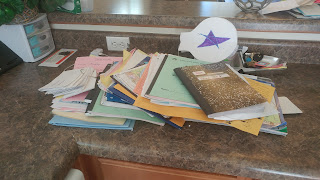 Anyway, Tuesday was the babysitter's first official full day with them and they painted their nails and made slime and played with a friend.  At 4:00, Paul took them to a going away party for a family of 6 that are friends of ours.  They are moving to Austin, TX (isn't everybody?).  The party was at the same friend's house that the last day of school party was at the day before.  I went later once I got off work and we stayed there until about 8:00.

On Wednesday, the babysitter took them to Michael's and then out for Sushi, but they didn't really like it so they went next door and got Thai instead.

The babysitter wanted today and Friday off to go to some music festival (not in Austin, but I'm sure there is one going on there, too, ha ha) so I ended up taking today off, which was great.  We slept in, went to Starbucks, the library, Justice and Michael's again.  They played outside making slime again, and then later we all went to an outdoor concert at a park in our town center.  They do outdoor concerts every Thursday all summer. 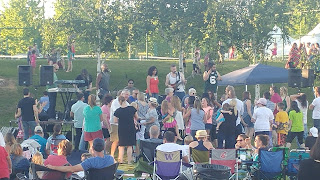 Tomorrow Paul is off and I don't know what they'll end up doing but they'll probably try to be outside a lot, and for dinner we are going to grill steaks.