Week 3 started out at Crescent Bar where we spent the weekend before the 4th.  We were just cleaning the condo and washing all the towels and linens before heading home, however, so not really enjoying the pool or river and whatnot.  We stopped at an old-fashioned drive-in for burgers and shakes on our way home.  I have fond memories of making such stops on camping trips with my family growing up, so once in awhile I try to recreate some of that for the girls, but turns out no one (except me) really cared for the food there so I guess we'll come up with some other tradition.

The next day was the 4th, and we went to a friend’s for a barbeque and fireworks and then to the big community fireworks show after that. 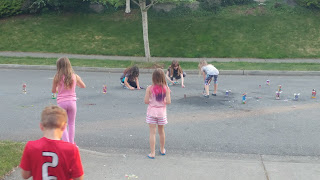 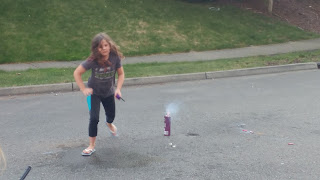 The girls were having a blast (literally, ha ha) shooting them off themselves this year, with plenty of adult supervision 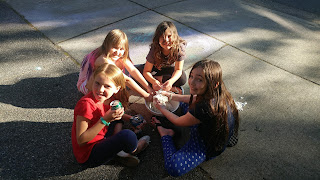 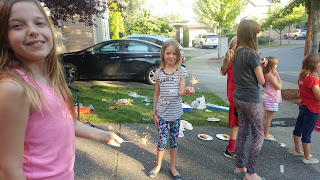 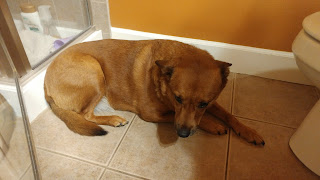 their poor dog hid out in the bathroom :( 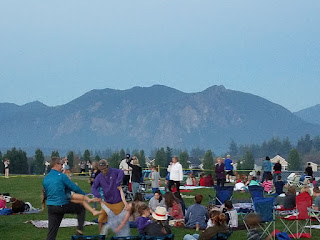 Our view while waiting for the fireworks to start

Wednesday it was back to work for Paul and I.

Thursday Olivia had a doctor's appointment in the next town over from us just late enough for Paul to get there in time after work but not to be able to come home first, so the babysitter had to drive them there and meet him.  But first they went out to lunch at a nearby Thai restaurant and then to Cold Stone for dessert.  It's so nice having a sitter with her own car that can take them places.  I don't have to feel quite as bad for having to leave them with one all day, every day,

This evening (Friday) the girls went to a birthday party.  They were supposed to be gone until 9:00 but came home early because they have already seen the movie (Moana) that the host is showing.  Whatever, and darn.  I was enjoying a nice, quiet evening.  Oh well.  I'm going to start packing for our cruise tonight!  We don't leave for another week but I don't want to leave it until the last minute so I'm going to start now with things I know I won't need in the meantime, like swimsuits and certain clothing items.  Yay!  I'm so excited!