Last week we went to Long Beach, WA, a cute little coastal town right on the Pacific Ocean just north of the mouth of the Columbia River (i.e. the dividing line between WA and OR).  We had a pretty good time, although the weather was cold and cloudy much of the time.  We did have a few warmer spells but it mostly hovered around 60, 61.  Nonetheless, we enjoyed playing on the beach, building sand castles and flying a kite, and took a day trip to Cannon Beach, OR, about 45 minutes South.  And of course, I ate my weight in Salt Water taffy.

Anyway, on Tuesday we did a horse-back ride on the beach.  I was figuring that I would have to go alone while Paul watched the girls, but to my surprise they let the girls ride in front of us, so we could all go together.  They had never been on a horse before but they weren't the least bit scared.  We were on HUGE horses, too--Shires, which are a DRAFT horse breed (draft horses are the big work horses, like the Clydesdales in the Budweiser commercials).  But they were also really lazy.  Such a disappointment for an experienced rider like me.  Most places in the USA that rent horses for trail rides or what-not only let you walk, I guess for liability reasons.  But these people allowed us to trot!  Cool!  However, our horses refused to!  I was kicking the heck out of this guy and he would. not. move.  So that was kind of disappointing, but it was still fun to take the girls on a beach ride. 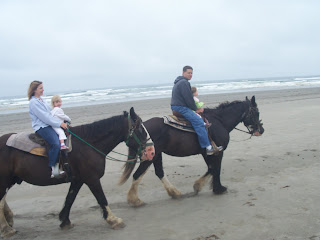 The day before we left, we went to Paul's company picnic where the girls got to ride in a bucket truck (he works for an electric/gas ulitily).  That was awesome.  Unfortunately, our camera's battery had died so I only got pictures on my cell phone, which I can't seem to upload.  I did get some cute pictures of the girls eating ice cream, however: 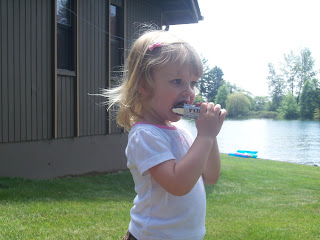 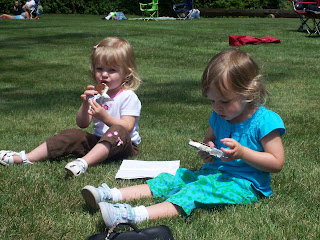 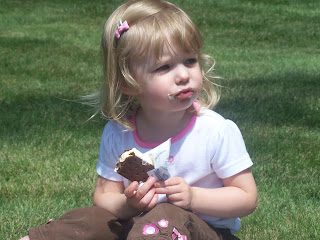 And playing on the playground: 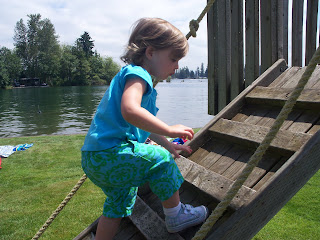 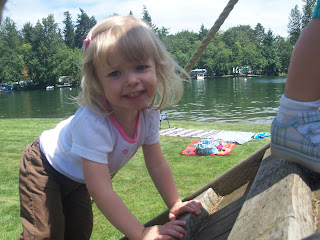