A Day at the Beach

We've been stuck at home all week because, and this might sound silly, but we left our cell phone at Crescent Bar and it makes me nervous to drive anywhere not super close without it. What if we got a flat tire or something on the freeway? Gees, what did we all ever do before cell phones. We obviously got by, but still.  So yesterday I was at least going to take the girls just up the street to our neighborhood grocery for a few things, and maybe hit the coffee/donut shop while we were at it.  Just as we were getting ready, a friend called and asked if we'd be up for hitting the beach.  We were all over that (as long as I got to her place without a flat tire/breakdown she had her phone for the rest of the trip).

One of the many things I love about Seattle is all the water/waterfront parks and beaches.  Between Lakes Washington and Union and Elliott Bay there are a gazillion places to go to be near water.  We opted for a little beach on Mercer Island.  When we picked up my friend I realized that in my haste I had forgotten the girls' sand pails/shovels/arm floaties, so she grabbed some Tupperware containers and the girls made do with those.

We had such a good time and I got to thinking how could it be that I've never really thought about taking them to a beach before?  I mean, we go to beaches all the time at Crescent Bar, but when we're home we never do.  So I've decided that before summer is over I'm going to try to hit more beaches/parks. 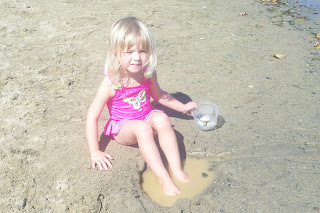 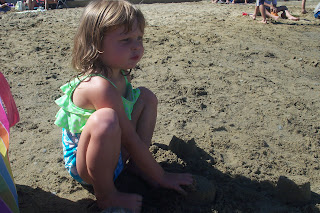 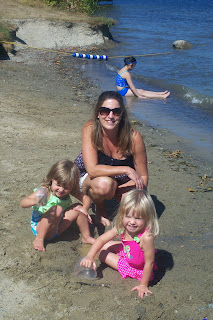