This is the last full week of summer vacation!  I can't believe it.

Paul had last week off so after soccer practice on Monday he and the girls took off for Crescent Bar, leaving me with the place and time to myself for the last several evenings to do whatever.  Unfortunately I didn't make as much progress on neglected projects as I would have liked, but it was still nice to have the (clean) house to myself.

They rented jet skis one day and went to a water slide park one day.  They always get to do all this fun stuff while I'm stuck working (sigh).  I'm really hoping to have some PTO saved up so I can take a few days off next summer in addition to just our annual trip.

They came home Friday and then we all went to the Mariner's game (see previous post). 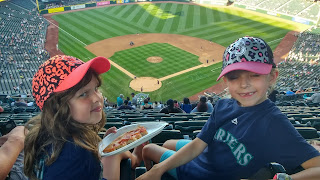 Saturday started off good.  We slept in, then I took then in for their back to school haircuts.  Just a trim, nothing drastic, but Olivia asked for her hair to be curled. 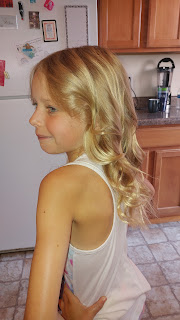 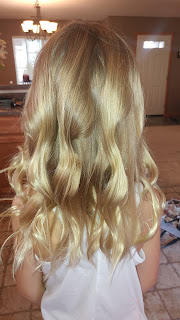 We came home and had lunch and then they were riding their bikes to a friend's house and somehow Kayley fell and knocked out a (permanent) tooth.  We went to urgent care, but she needed dental work (obviously) and they couldn't get a hold of our regular dentist, being Saturday and all so they sent us to Seattle Children's.  There they were able to put the tooth back in the socket (actually they did that at the first place but it wasn't quite in all the way) and put a splint on.  If done soon enough there's a good chance the tooth will reattach but in our case it probably won't and she'll end up with an implant eventually.  She also got a few stitches in her lip.  It was quite a day.  It happened around 2:30 and after going to urgent care and then Children's, then out to dinner while we waited for her prescriptions, then back to pick up the prescriptions, we finally got home at like 10:40 or something.

So on to this week, Week 10, our final full week.  Our regular babysitter is out of town so her brother is watching them.  Kayley has had to forgo soccer, and we have to give her 2 different antibiotics, one which can't be taken 2 hours either side of diary consumption, which has been interesting because a) they are in capsule form which she can't swallow and the pharmacy didn't have the liquid form so we have to open the capsule and spend the powder on apple sauce or put it in juice and I'd like to put it in yogurt or pudding but she can't have dairy with it, and b) there are few things she can eat right now and most of them are dairy products (yogurt, ice cream, pudding, etc.).  But we've just been giving it in apple juice or sauce so it's working out.

Last night they had a sleepover with one of their newer friends.  I made popcorn but poor Kayley had to have ice cream instead. 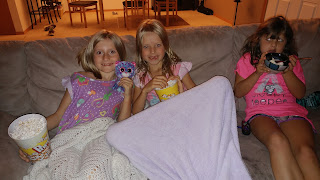 Nothing else is going on this week.  Just a normal work week with a babysitter.  On one hand I'm really looking forward to school starting but on the other hand I'm dreading the crazy, chaotic mornings.
Posted by Jill at 8:44 PM