First of all, today is our 4th Anniversary!  Our main celebration will be Saturday at Purple Cafe and Wine Bar but tonight we're going to take the girls to the local mexican place.  I never know what to get Paul, so last year it finally occurred to me to just follow the "traditional anniversary gift" themes.  Since the traditional gift for 4 years is fruit and flowers, I got him some raspberry truffles and other chocolates, and a strawberry pot for our back porch (a planter with scattered openings that you grow strawberries in).  We're also talking about getting a new cell phone (or phones), like an iPhone or something similar (we still have old school phones with the old-style touch pad--very hard to text, not that we text much), except we have Verizon so we can't get an iPhone (I guess) so I thought maybe a Blackberry would be cool since it fits in with the 4-year theme but we need to shop around and do more research so I don't know.  I just want a new, current-style phone with all the apps and a regular keyboard and what-not.


Anyway, this morning the girls and I had to take a friend to the airport.  It's a little ways, about 45 minutes, so I was a little worried about them being in the car for almost 2 hours or so, by the time we picked her up, drove there, dropped her off, etc., but they did really good.  We broke it up by stopping at Gene Coulon Park in Renton since it was on the way home.  They have an Ivar's and a Kidd Valley so you can get lunch and eat by the lake.  It's really pretty.  The girls saw some ducks and had a great time running around, until it was time to leave and they both threw a tantrum.  It's hard enough to deal with one toddler tantrum, but two is insane.  And of course it happend right in front of the restaurants with tons of people enjoying their lunch on a goregous day.  Or at least they had been up to that point!  Ugh.  I was so embarrassed.  Then I was worried that they would fall asleep on the drive home, meaning Kayley wouldn't take a nap but luckily that didn't happen and they are both sound asleep right now.  When I'm finished with this post I'm headed outside to read in the sunshine!  Ah, the life of a SAHM! 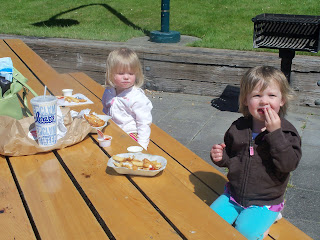 Eating fish and chips for lunch 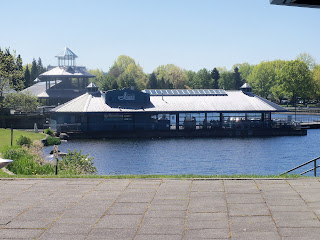 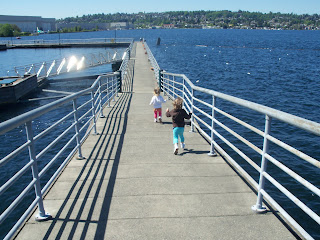 Running down the dock 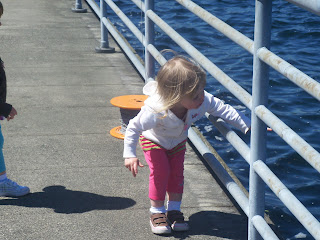 Olivia pointing to something 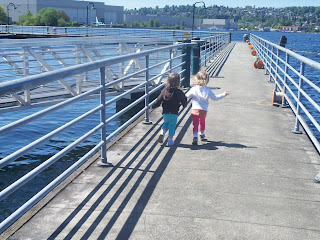 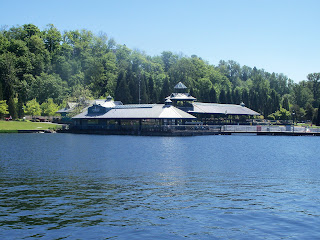