I've never been real big on Valentine's Day.  I was single forever, and when I did have a boyfriend there was all this pressure to get something romantic and meaningful and it was always so hard to figure out what to get.  I mean, what else is there besides chocolate, really?  Most guys aren't big into jewelry and even if they do wear chains or whatever a guy can only have so many.

Now that I'm married, I'm just kind of eh about the whole thing.  We haven't gone out the last few years because we can't afford to go out AND pay a babysitter, and I imagine it's hard to even find a babysitter on V-Day.  I usually try to fix a special dinner, but it's hard to make it all romantic when the girls are here with us.  Sure, we could wait until they go to bed and then light candles and have a romantic late dinner or just dessert if we've already eaten, but Paul gets up so early that he usually goes to bed the same time the girls do, although they are starting to go to bed a little earlier (8:30ish instead of 9:00), so we'll see how it goes tonight.  I'm actually thinking about feeding the girls first, then letting them watch a movie while we eat in peace.  Then, after they go to bed we can have some alone time with wine and dessert before he has to go to bed.

I also always just think of Valentine's Day as being for couples, so it only just occured to me a few days ago to get the girls a little something (even though I have in years past).  And there wasn't much of a selection being so last minute and the last thing they need is another stuffed animal so I got them each a Pez dispenser, one Belle and one Rapunzel, and some M & Ms.  Then, I realized TODAY that it never occured to me to have them make a card for daddy.  Shesh.  I'm so lame.  And poor Paul.  He is shopping for my gift TONIGHT after work, with all the other gazillion procrastinating husbands, but that's because he hasn't been feeling well the last few days so he couldn't really help it.

Anyway, the girls had their Valentine's party at school yesterday, and today we made red velvet (from a boxed mix {hanging head in shame} because they were on sale and I'm lazy) cake pops and cupcakes. 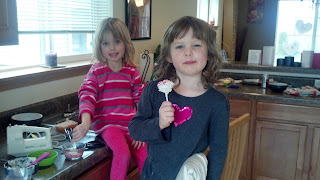 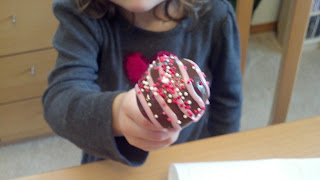 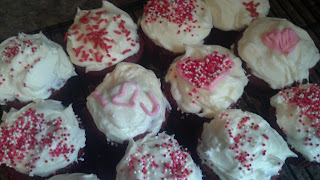 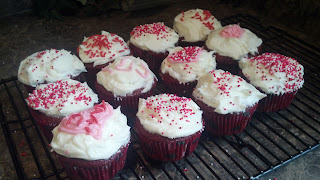 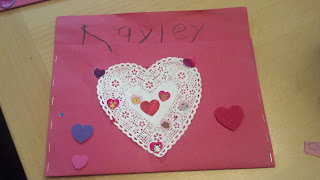 The envelopes they made at school for all their Valentines 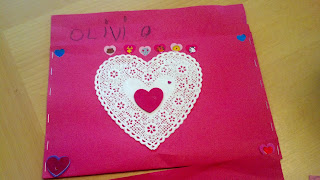 In other news, 5 years ago today I had an OB appointment and it became a certainty (we'd been pretty sure for awhile) that I would have a c-section because both babies were breech.  Later that evening while cooking our Valentine's dinner together, we got a call from the nurse.  Our c-section was scheduled for Thursday, February 28 at 9:00 AM!  It was great to have the end in sight (and since it was a leap year I was relieved that they didn't schedule me for February 29th!).