Paul's parents gave the girls swim lessons for their birthday.  They started in mid-April and it was a 5-week session (twice a week).  The preschool classes go from P1 to P5 and they both started in P1, but we immediately realized they should probably be in P2.  They assessed them and agreed about Kayley being in P2, but said Olivia should stay in P1 because she wasn't very comfortable on her back.  She had a really hard time at first with her sister getting to move up without her, especially since one of their best friends was in the same P2 class, but she got over it after a few lessons.  At the end of the 5 weeks they assess everyone and recommend what level to go to next.  They recommended P2 again for Kayley and still P1 for Olivia.  But we weren't about to pay for another session of P1 because for the most part it was way too easy for her, so we talked to the staff and they let us to go ahead and put her in P2 for the next session.  So they both just finished that session and this time it was Olivia who advanced to P3 and Kayley was still recommended P2.  Kayley was super close, they said, but her legs sink when she rolls from her stomach to her back (or vice versa).

Anyway, I just thought it was funny that Olivia wasn't even supposed to be in P2 but then she advanced to P3 at the end of it.  We aren't going to continue lessons right now anyway, but if we did we would just but them both in P3 and I know Kayley would do just fine, just like Olivia did great in P2 when P1 was still "recommended".

Meanwhile, they will get lots of practice this summer at Crescent Bar and Coeur d'Alene. 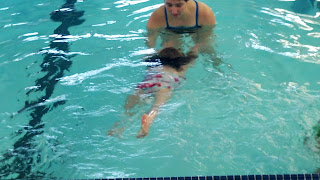 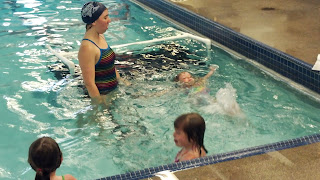 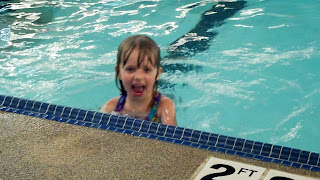