The week started out pretty boring, with bad weather and the girls unmotivated to ever go anywhere (except maybe the bouncy house or McDonald's).  Things started turning around by Thursday, though, and it's been a really fun weekend.

Monday - Nothing.  Played at home all day and after I left to go to the gym once Paul got home they finally got to play with their friends who were out of town last week.

Tuesday - Home all morning, trip to Target and Fred Meyer in the afternoon.  Friends came over for awhile until dinner, then we watched part of Monsters, Inc. (finished it the next night) in preparation for seeing Monsters University in the theater soon, hopefully.

Friday - The girls went to their first slumber party!  I was a little worried how they'd do but they did just fine.  I think it definitely helped that they had each other.  It was a hot day, so when we first dropped them off, they played in the birthday girl's new pool, then they made mini pizzas, decorated cupcakes, made their own snack mix and watched a movie.  And, with them being away for the evening, Paul and I got a rare date night!  We went to the Olive Garden, because he hadn't been since I was pregnant and I had only been once since then, back in September.  After dinner we hit up Safeway, romantics that we are, then went home and had cocktails on our patio. 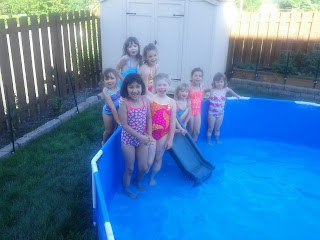 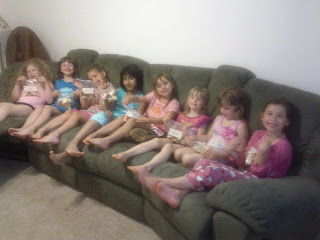 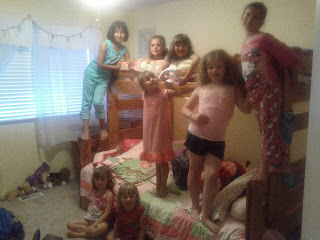 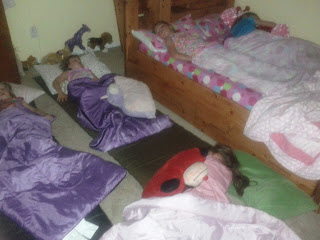 Saturday - I had to go up to MV for a bridal shower so Paul picked up the girls from the slumber party and took them to the splash park (I'm not crossing that off my bucket list yet, though, since I didn't go).