I was able to sign the girls up last minute to attend gymnastics camp last week.  They went for 3 hours every day, Monday through Friday.  It was so nice to have a little break during the day for the first time since early June, and they really enjoyed it.  It was hard to get any pictures because the spectator area is kind of far away, and I was mostly just dropping them off and then picking them up at the end although I did try to get there a little early most days so I could watch for a bit.  And for some reason the few that I did take are not showing up when I go to "insert image" and "from my phone", so never mind.

Anyway, I ended up using 3 of the 5 days to work out since Paul was working late every night so I couldn't go to the gym in the late afternoons like usual, so that was kind of a bummer (I would have rather had that time to work on projects or just browse a bookstore or something) but oh well.  I'll have lots of time for that in a few more weeks once school starts.

On Saturday, we went to Scenic Beach State Park with some other couples from our Sunday school (adult Bible fellowship) class at church.  We got there around 11:30, barbequed burgers and hot dogs, had a scavenger hunt for the kids, and played on the beach and the playground.  The girls had fun collecting seashells, which they brought home and painted today. 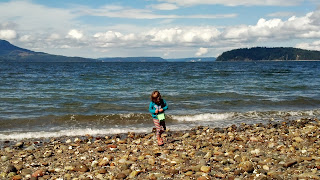 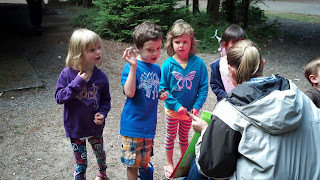 Getting instructions for the scavenger hunt


2 more weeks until Kindergarten starts!  The countdown is ON!
Posted by Jill at 10:08 PM