That's it.  I've said it many times before, but this time I mean it.  I am never going to Costco with the girls again.  We went today.  I grabbed a cart and immediately, they both wanted to ride in the back (main part of the cart where you put all your stuff) instead of the child seats in front (and btw, thank you Costco for having carts that hold TWO kids, instead of just one.  I wish more stores had that).  So I put them in, but the cart was too hard to steer and I hadn't even begun to fill it yet.  So I made them sit in the front.  But Kayley started whining that her leg hurt (from the metal bar, I guess) so I tried putting them in the main part again but had them sit further toward the front.  That worked for awhile, but eventually they both insisted on walking.  But they tried to walk right in front of me, helping me push the cart, and that was really hard, and then they wanted to hang off the side.  When they did just walk, they were always lagging behind or getting in people's way or whatever.  It was awful.  We finally managed to get what we needed and get the heck out of there, and then we all shared a chocolate/vanilla twist frozen yogurt.  I hope they enjoyed it, because it'll be awhile before they go back! 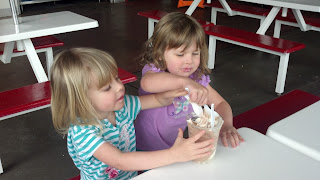