May 13th was our 11th anniversary.  After Olivia's dance recital photo shoot, we got a babysitter and went out to dinner at Daniel's Broiler and got a table by the window with an awesome view (it's on the 21st floor), except for it was kind of cloudy that day.  We had a delicious steak dinner and then went into the lounge to listen to the piano player and have a drink.

The next day was Mother's Day.  We went to church and then Paul's parents came over later and we went to an early dinner.  The girls gave me cute cards and pictures they made at school as well as some plants. 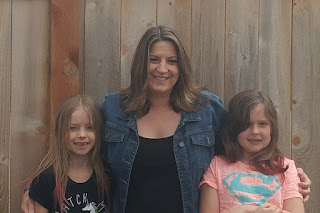 Last weekend we had the dance recital that I already posted about on Saturday and then Olivia went to a birthday party/sleepover, so while she was there I took Kayley to Michael's to get stuff to make slime (their absolute favorite hobby right now, other than electronics).  Then we went out to dinner and then Kayley and I were going to go across the street to the pottery painting place while Paul walked home but it had closed early, probably because business was slow due to the gorgeous weather.  So we went home and Kayley made a huge vat of slime instead. 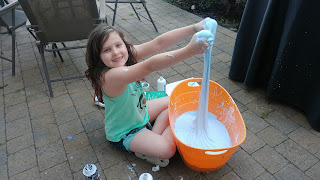 Sunday the girls and their friends all had a lemonade stand.  Like I mentioned earlier, we finally had some great weather after having a positively awful winter and spring. 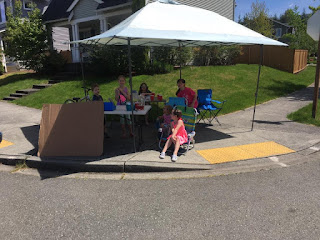 Now I'm just looking forward to the upcoming 3-day holiday weekend!  I need that extra day SO bad.  I am so behind on everything.  We never go camping or anything Memorial Day weekend because traffic sucks, so we are just sticking around home but we are thinking about a trip to the Outback Kangaroo Farm.  We'll see.
Posted by Jill at 10:03 PM