I've mentioned before that it doesn't rain as much in Seattle as most people think, but there are 3 days every year that you can pretty much count on rain.  They are:  Labor Day, July 4th and Memorial Day!  But for once we had an absolutely beautiful Memorial Day weekend!  Which is even more of a big deal than it otherwise would be because of the colder and wetter than normal winter and spring we have had.  I seriously can't remember the last time we had a Memorial Day weekend where it wasn't cloudy and/or rainy at least one of the three days.  We practically lived outside all weekend.  It was so nice!

Saturday we took a trip up to Arlington to a place called the Outback Kangaroo Farm.  I never knew this place existed until sometime over a year ago my niece and sister-in-law went and posted about it on FB.  I've been wanting to go ever since and we finally made it.  It's like a small zoo just on someone's property with kangaroos, wallabies, alpacas, ring-tailed lemurs and peacocks.  You do a guided tour and get to walk among, pet and feed the kangaroos and alpacas but not the lemurs, unfortunately.  It's really interactive and fun! 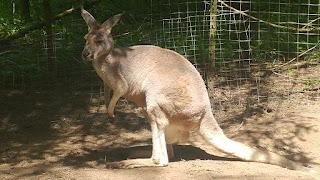 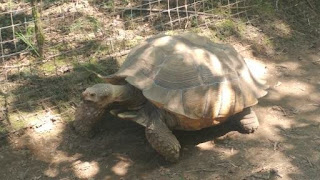 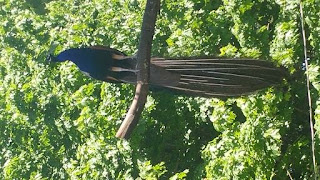 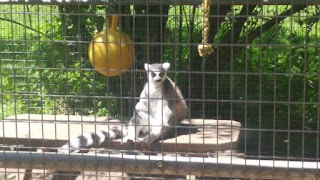 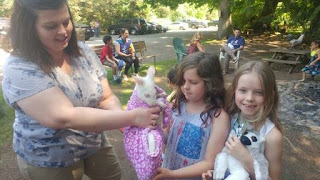 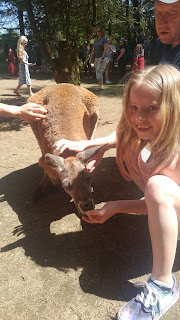 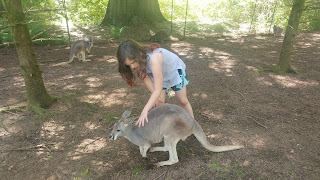 It's a little over an hour away so we stopped for breakfast on the way, then on the way home we took a different route and stopped at a park/campground with a cool suspension bridge and just walked around and played in the river for a bit.  When we got home we barbequed some chicken and later had some neighbors over for s'mores on our fire pit.

On Sunday we worked in the yard most of the morning and then went up to Rattlesnake Lake.  It was SO crowded, of course, but we had fun playing in the water which was super cold but it felt good to cool off.  Then we barbequed again, steak this time, and once again had (different) neighbors over for s'mores. 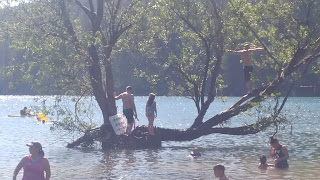 It's a thing to jump off this tree.  That's Paul and Kayley.  Olivia did it too. 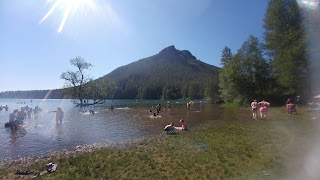 Today we spent most of the day at home, except the girls went on a hike with the neighbors so while they were gone I got to spend a few hours working on one of my many projects that I never have time for.  Then when went to a friend's for a barbeque and that sums up our glorious, sunny weekend!

It feels like summer has officially started.  We are down to 15 days of school, one final Girl Scout meeting and just a handful of activities left.  Can't wait.