Today is our 11th anniversary, and this is the first time since we got married that it has fallen on a Saturday.  For the last several years I've been determined to go away somewhere for this anniversary but it just didn't work out.  Olivia has a dance recital photo shoot this afternoon (the actual recital is next weekend) and then there's Mother's Day tomorrow and I didn't want to mess up anyone's Mother's Day plans by having them babysit.  Getting married on Mother's Day weekend was probably not the best choice.  I get kind of tired of having them grouped together most years.  Oh well, totally not a big deal.

So anyway, in honor of our anniversary, I am sharing a fun back story around when Paul and I met and started dating.

Back in 2002,  I had been attending the same church for about 7 years and decided to start trying out a few different churches in an effort to find one with a bigger and better dating pool :) .  But on October 27 of that year I went back to my former church for the first time in a few months.  I also attended an adult bible fellowship class (Sunday School for grownups, basically a Bible study but at church on Sundays instead of someone’s home during the week) and there was a new guy there that week.  He was cute, and I was interested.  But right after class got over, instead of going up and introducing myself, I, like usual, had to pee really bad from having had coffee so I instead made a beeline to the bathroom.  I was so bummed, but figured I’d get a chance to meet him eventually.  Then, after my bathroom trip I went back to the foyer where people were milling around between services and he was there and came up to ME and introduced HIMself!  Yay!  We chatted for a bit and then it was time to go into the sanctuary for the main service and as we parted ways I thought to myself, “I just met the man I’m going to marry.”  His name was Stephen.

Over the next several months Stephen and I hung out in groups and got to know each other a bit and started developing a friendship.  As much as I wanted to date him I figured it would never happen.  In January of 2003 I found out he had a girlfriend.  So instead of going to our church’s singles’ Valentine’s party and seeing them together (turns out she wasn’t there--she lived pretty far away-- but I wasn’t taking any chances), I decided to go to a dance at a different church instead (the one Paul attended, but obviously I didn’t know him yet).  I found out later that Paul was there, and we actually danced together (at one point we formed a big circle and everybody danced with everybody, so even though we don't remember, we know we danced with each other).

A few weeks later, Stephen had broken up with his girlfriend and he and I were at a coffee shop/book store just hanging out as friends.  Then.  THEN, he said something to the effect of, “So, I was wondering if maybe you’d want to start hanging out a little more”.  I can’t remember the exact words, but something along those lines.  I was ECSTATIC!  I didn’t show it, of course.  I was just like, “yeah, I’d love to” or whatever, but inside I was jumping up and down screaming.  We dated very briefly but ultimately he wanted to just be friends.  I was devastated.  So I kind of started going back to the other (Paul's) church off and on, and several months later he (Stephen) followed me there (not to be where I was, but just to meet new people and be part of a bigger and better singles group).  He started making friends with people there, including Paul and his good friend Bela (Bay-la).  I still hadn’t met Paul officially, because we both attended somewhat sporadically (especially me, because for awhile I was recovering from surgery, then I was still going to the other church off and on, or just skipping J), but we definitely crossed paths a time or two.  Once in the summer of 2004 when Stephen’s mom and sister were visiting from Atlanta a big bunch of us went out to lunch with them after church.  Paul was there, and remembers me coming in late (I had trouble finding the place), but still we never officially met and I don’t remember him.  In the fall of 2004, Stephen, unbeknownst to me, made several attempts to set me up with Bela.  It was always kind of last minute, and I always had plans.  I was actually dating someone at the time but it wasn’t serious.  Anyway, a bunch of them (including Paul sometimes) would be going to a movie or something and Stephen would try to invite me to introduce me to Bela but it never worked out, although I did finally meet him at a party at Stephen's in November 2004 but it wasn't like a blind date or anything, we just both happened to be there.

Then in January of 2005 I signed up for Eharmony.  Paul was one of the first people I was matched with and we started communicating back and forth.  One night about a week or two later, I was out with Stephen and two other friends (Sarah, a new acquaintance from the new church, who also knew Paul, unbeknownst to me, and my friend Erica) watching a football play-off game (Stephen's team the Atlanta Falcons and I forget who else, but NOT the Seahawks).  Somehow the subject of dating and marriage came up and I made a comment about how I had pretty much come to the conclusion that I was probably never going to get married (I wanted to, I just was convinced I was never going to find anyone).  Here I was, communicating with Paul on Eharmony and hanging out with 2 people that knew him pretty well, but I had no clue, and they had no clue I was communicating with him.  I went to church the next day but he wasn't there because he had gone to Whistler for the Martin Luther King holiday weekend.  I remember chatting with Bela, having no clue that he was good friends with this guy I was communicating with on Eharmony!

About a week later on Saturday the 22nd, a bunch of us, including Stephen, went out for my birthday.  I skipped church the next day, having been out late and all, but had I gone we probably would have met there.  But we finally met on the following Saturday, the 29th for our first date.

We met at the Greenlake Starbucks.  The plan was to have coffee and then walk around the lake after.  By now we knew that we both went to the same church and knew some of the same people and he says I looked vaguely familiar but probably wouldn’t have been able to place me if he hadn’t already known and I didn’t really recognize him.  We had our coffee then walked the 3-mile loop around the lake and when he suggested lunch after I agreed.  We saw each other in church the next day, and then went to lunch after and then went out again the following weekend and were soon exclusively dating.  On December 3rd, 2005 we got engaged (you can read about that here) and on May 13th, 2006, we got married.  Bela was his best man and Stephen, though invited, had moved back to Atlanta and did not attend.  The end J 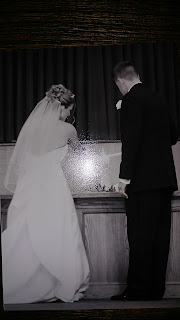 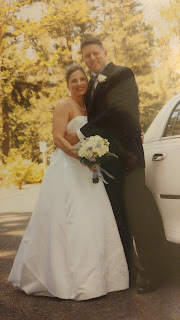